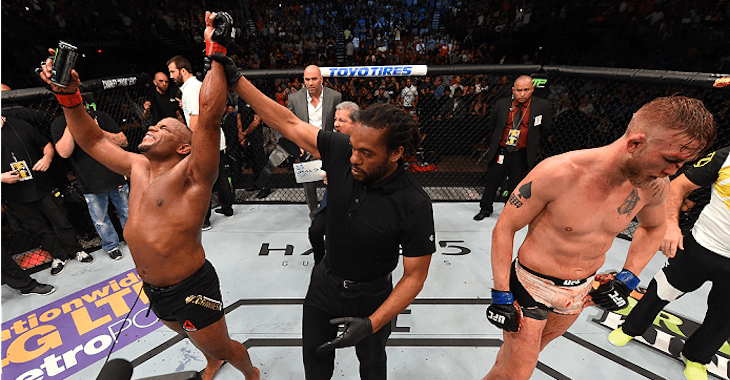 At UFC 192, UFC light heavyweight champion Daniel Cormier stepped into the Octagon to defend his light heavyweight strap for the first time. Standing opposite ‘DC’ was Alexander ‘The Mauler’ Gustafsson, the man who many believed to have defeated Jon Jones back in 2013.

The fight was an extremely close one that went the full five rounds. When UFC announcer Bruce Buffer read the judges scorecards, it was Cormier who was given the nod on two of the three judges scorecards, giving him his first successful title defense after defeating Anthony Johnson for the vacant light heavyweight championship at UFC 187. Now, a year following his fight with Gustafsson, Cormier took to social media to reflect on the bout:

Let's go back to last year this time I was prepping for the fight of my life against @alexthemauler. I had no idea this man was going to drag me to hell and back, but looking back now I am thankful for his effort. I love this picture. Captures the moment. I am so thankful for the support I get. #dcchampion #ufc192

Cormier, who is fresh off a dominant unanimous decision win over Anderson Silva on the main card of UFC 200 back in July, currently does not have his next fight set inside the Octagon. While Cormier and Jon Jones were slated to have their highly anticipated rematch in the main event of UFC 200, Jon Jones was pulled from the fight just 48 hours before the pair were set to step into the Octagon. While it was initially reported that Jones had failed an out-of-competition drug test, recent reports have revealed that Jones’ appeal process has been going well, with UFC President Dana White even going as far as to state that Jones could be back in the Octagon sooner rather than later.

White followed up his comments by eyeing a potential interim light heavyweight title fight between Jones and Anthony Johnson, with the winner getting a crack at Daniel Cormier, although there’s been no word as to when Jones will be back in the Octagon.