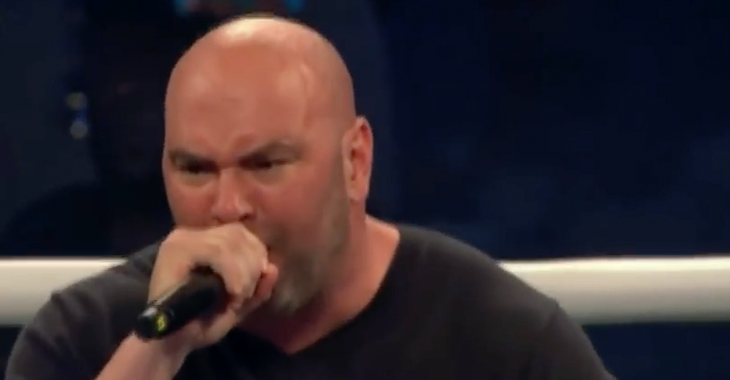 Ahead of a new TV deal the UFC needs and the beginnings of ZUFFA Boxing being worked out, Dana White doesn’t care at all about burning bridges, especially if that bridge is SHOWTIME. They worked together to promote Conor McGregor’s gargauntuan boxing match with Floyd Mayweather, with White saying that the whole thing was an easy experience. However, it looks like that wasn’t the case behind the scenes as White just recently publicly buried them in this recent interview.

“Think about this — and I don’t give a sh-t about SHOWTIME’s f-cking full of sh-t press release they put out — [Conor McGregor’s boxing match with Floyd Mayweather] is the biggest fight ever. Ever in combat sports history. The thing did over 6.7 million buys and if the service didn’t drop, we would have gotten closer to 7 million. It was the biggest event ever.”

“It was the biggest boxing event ever without a boxer, there was only one boxer involved in the fight. I still question [the numbers]. The way that they handled that press release and what they did — I didn’t trust them before and now I despise those f-cking guys. The SHOWTIME guys, I’ll never work with them again. Ever. I’ll never work with SHOWTIME again.” — Dana White speaking to YAHOO! Sport’s Kevin Iole.

It seems like some of the animosity has to do with the SHOWTIME number reports that the Mayweather and McGregor boxing match only was the second biggest pay-per-view of all time. The SHOWTIME pay-per-view ended up doing 4.3 million in PPV buys, just 3ooK short of breaking the record that still holds solid for Mayweather’s fight with Manny Pacquiao. Dana White refutes the numbers and will never be working them again.