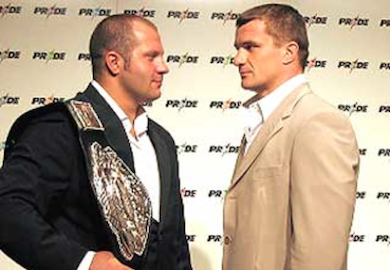 “I like Fedor and I respect him a lot, but it’s not his job, it’s not his concern to act like my mother and to give any kind of advice, especially to me. I think I’m old and I believe wise enough that I will know when it’s time to go. What happened to me in that fight, it could happen to anyone. Really, I don’t know why Fedor said it.”

“Later on I heard that Fedor is saying this and that. I don’t think he should do it. Of course he has the right to give his opinion, he’s a legend of mixed martial arts. But I didn’t like his comment, to tell you the truth. … I never gave a comment on his fights. Every loss of Fedor’s, I [felt] like it was my own.

“At the end of the day, we used to fight together in the Pride ring, so many time we shared a dressing room. I was fighting in his town and he didn’t show up for the press conference. If Fedor came to my hometown, I would find him a few days before, I would take him to lunch, dinner, whatever, shake hands to see him. And I saw him only in the ring. But that’s him. I think and feel differently.”

“I don’t have his phone number, he doesn’t have my phone number. We are not in contact, but I always liked him as a fighter, and especially, we have good memories from Japan, both of us. At the end of the day we were bothers in arms, sharing a few times the dressing room. I was sorry for every loss he had. I was shocked and I was so sad, and at the end of the day I didn’t expect that for him. But enough about Fedor. I really wish him all the best. I’m not mad at him, I just think he shouldn’t have [said] that kind of a comment to me.”

When Cro Cop was in the midst of his MMA slump, MMA legend Fedor Emelianenko, came out and expressed his desire to see the head-kick master to hang up his gloves.

During today’s stint on ‘The MMA Hour’ Cro Cop touched on that criticism and dove deep on his relationship with Fedor Emelianenko.