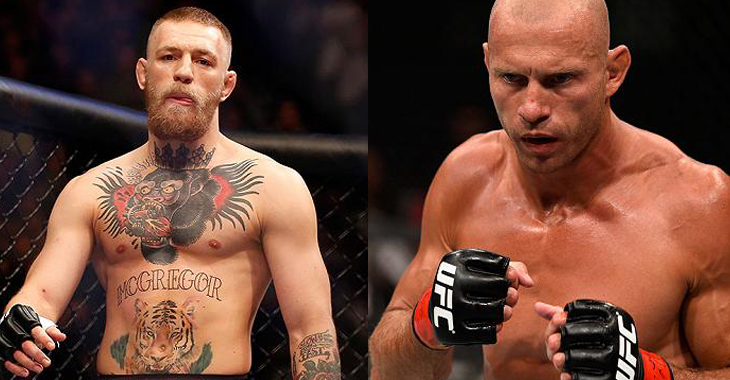 UFC featherweight champion Conor McGregor has a chance to make history when he meets UFC lightweight champion Eddie Alvarez in the center of the Octagon. If McGregor finds his hand raised over Alvarez on November 12, he will become the first fighter in UFC history to be a concurrent two-weight UFC champ.

Also on the card is the always entertaining Donald “Cowboy” Cerrone, who will be looking to raise his rank in the welterweight division against Kelvin Gastelum. Cerrone was a guest on UFC Tonight this week and spoke about UFC 205 and had some interesting things to say about the headlining star Conor McGregor when he was asked some tricky questions by host and UFC middleweight champion Michael Bisping.

Bisping said, “Conor McGregor says that all UFC fighters that don’t like him are jealous. Are you jealous of Conor McGregor?”

“Ah, he’s… Probably, yeah,” Cerrone said with a smirk. “There’s probably a little bit of inner jealousy. Sure, I’d love a ‘red panty night.’ Yeah, naw, I don’t know about jealous but I mean the guy puts asses in the seats man. I gotta give the guy that. He does show up. He does the job and every time I bet against him he goes out there and wins so, gonna start betting for the guy I guess now sh*t.”

Bisping then acknowledged that Cerrone put on a great performance against the lightweight champ Alvarez, beating him before he was champion at UFC 178 back in 2014. Bisping asked “Cowboy” if he feels that he should be headlining UFC 205. “Nah,” Cerrone said. “I mean, I was rallying for the Eddie fight, but sure, why not but I mean hey, Conor sells way more seats than me. So I mean, boss says, ‘Hey, get your ass down on the list. You’re like first fight of the night kind of guy,'” Cerrone said laughing.

Do you think fighters that don’t like Conor McGregor are just jealous of him? Sound off in the comment section!