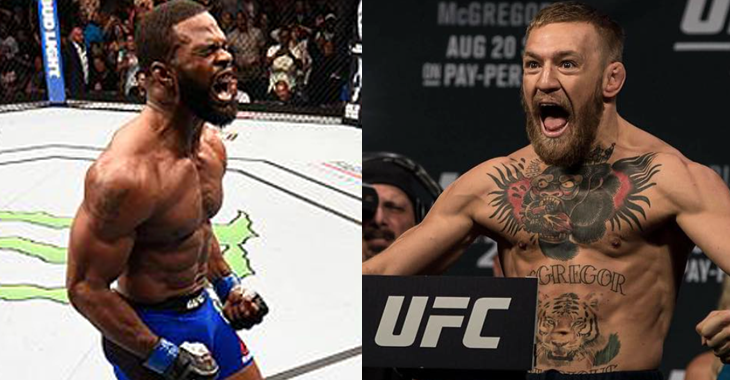 UFC welterweight champion Tyron Woodley is definitely starting to like the idea of defending his belt against the newly crowned UFC lightweight champion Conor McGregor.

Woodley has previously stated that he felt it would not be a good matchup between the two given the size of the lightweight and welterweight champions. “So he is a smart business guy and so I do not think he is going to want to come up and fight a guy who is going to outsize him,” Woodley told BJPenn.com’s Chris Taylor during a Rapid Fire interview prior to UFC 205 taking place. “Being 170 and fighting 170 is two different things. I walk around at 200. Giving up that 30-pounds. Plus he is not going to have a boxing advantage. He is definitely not going to have a wrestling advantage. He is definitely not going to have a strength advantage. And it would be a lopsided display of power. I just really do not think there is any advantage to him having that fight with me. I will not be discouraged by his antics or him talking crap. So to answer your question… I do not think Conor McGregor has any interest in coming for the welterweight strap.”

However, much of that changed as Woodley and McGregor exchanged some words backstage at UFC 205.

Now, “The Chosen One” has started a social media campaign for fans that want to see him fight “The Notorious” for his welterweight title. Woodley has asked fans to hashtag their posts that want to see the fight happen.

Woodley tweeted, “For all you @TheNotoriousMMA fans Hashtag #AskKenny or #AskTyron if you want to see this scrap #ufc.”

Is this the next welterweight title fight that you would like to see? Or do you want to see Conor McGregor defend his 155-pound title? Let us know in the comment section what matchups you’re most interested in seeing and be sure to add in Woodley’s hashtags if you want to see him take on Conor McGregor next!