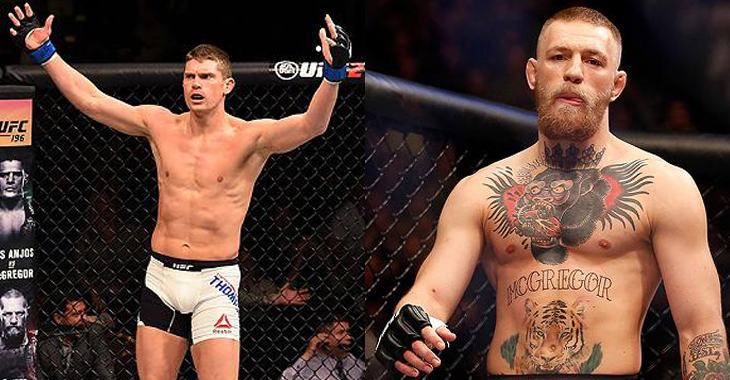 The idea of Conor McGregor moving up to fight Tyron Woodley for the welterweight title is surely a possibility with the way “The Notorious” has been working.

Despite McGregor having a 1-1 UFC record at 170, the most recent welterweight title challenger, Stephen “Wonderboy” Thompson feels that “The Notorious” isn’t physically big enough to compete with the UFC welterweights. McGregor has fought twice in the UFC at 170. However, both welterweight bouts were against Nate Diaz, who has spent most of his career in the UFC lightweight division.

Thompson was asked by Submission Radio if he feels that there is a possibility of McGregor cutting in line ahead of his welterweight title rematch after his UFC 205 championship bout against champion Tyron Woodley ended in a majority draw.

“You know what man, not at all, to be honest with you,” Thompson said to Submission Radio. “I think the UFC knows that I deserve that title shot, that I deserve that rematch. And you know what, I think that Conor McGregor’s gotta defend the 145 and the 155 title and I just think he’s too small for the 170 division. I mean, he’s walking around right at 170, maybe a little bit less. I don’t think it would be a good division for him to step up to.”

Although Thompson feels that McGregor is too small for the welterweight division, he thinks that the double champ could still put up a good fight against himself or Woodley.

“You know what, I think it would be a good fight no matter what,” Thompson said. “He’s one of the best fighters out there and that’s what we’re out to do. We’re out to fight the best fighters in whatever division, whoever steps up. We’ll take on any challenges and I think that’s what fighters do and if you’re a champion or not, you should take on all challenges. And, I think it would be a good fight. The fans would tune in to see who would win.”

McGregor has had a few run-ins with Tyron Woodley at UFC 205, which some think was all a part of the plan for “The Notorious” in setting up his next fight.

“I think it’s very smart, very intelligent for him,” Thompson admitted. “He’s already out there talking trash to Tyron and doing his thing, doing what Conor McGregor does. I mean, just think about it—a few years ago, he was living in his car, he had no money. Now he’s a multi-millionaire. I mean hats off to that guy. I’m happy for that guy. A lot of people look down on people who are successful, but Conor McGregor is successful because he runs his mouth and he knows how to put on a show. I mean, look at his press conferences. I mean, come on. People show up just to see him just act nuts. Hats off to that guy, he’s a very intelligent, very smart guy.”

Do you think Conor McGregor could compete with the top UFC welterweights? Share your thoughts with us in the comment section!