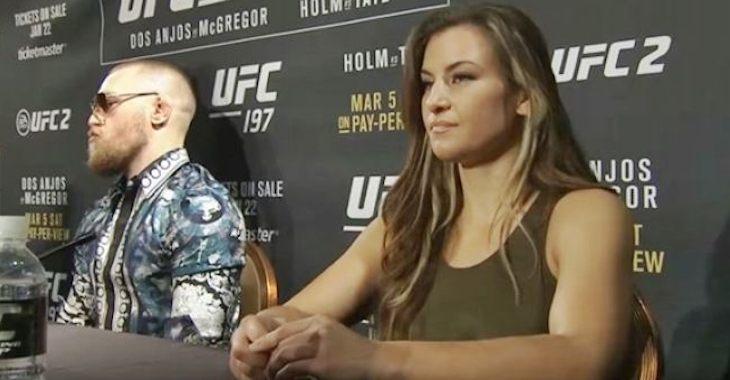 UFC lightweight champion Conor McGregor is the biggest star in MMA today. Former welterweight champion Georges St-Pierre, who is returning to action for a middleweight title fight with Michael Bisping at UFC 217, was previously regarded as the sport’s biggest star himself.

Based on Georges St-Pierre’s definite size and strength advantage, and his incredible grappling skill, many commenters seem to be leaning in his direction when it comes to predictions for this potential showdown. Former UFC women’s bantamweight champion Miesha Tate, however, is leaning toward McGregor. Tate explained why she favors McGregor over St-Pierre  on a recent episode of MMA Tonight on SiriusXM Rush.

“I think the speed favors him. I think he has great striking and I think the fact that GSP’s been out for so long, I think Conor McGregor can put together a strategy to beat pretty much anybody and I think the matchup actually favors Conor.

“I feel almost bad saying that because I’ve been a huge GSP fan for a really long time. He’s perfect when he fights. Maybe not the most exciting fighter you’ve ever watched but he’s almost perfect and that’s so hard to do. If you’ve been an athlete in any sport, to have a perfect game or a perfect match or a perfect bout, it almost never happens. You watch him go out there and he’s pretty much perfect in all of his fights. He never waivers from his strategy and he’s like a robot, like somebody’s controlling a controller somewhere and he’s just doing exactly what he needs to do to get through those fights. But I think with this one, Conor’s just so hard to beat and he’s so hard to get around mentally. I think the speed actually, being the smaller guy, does favor Conor.”

“I know that sounds crazy but dude, crazier things have been said about Conor and he’s done it. He literally predicts his exact what he’s gonna do in every fight. When he lost to Nate Diaz, I thought he was gonna lose again and he came out and he had the right game plan. He’s just brilliant. He knows how to figure out people. Not to mention, GSP has never had to deal with someone’s berating, that constant mental barrage that Conor McGregor does. Something is there. People haven’t quite figured it out but there’s something, an element that Conor McGregor adds that’s not just his skillset. He gets inside people’s heads and he ruins them before they even step inside the octagon. To say that he couldn’t do to GSP when he’s done it to everyone else, it’s insane to think that he couldn’t do that.

“So I just think he would probably do well. He’s evolving, he’s very athletic, he’s heavy handed. I think he could knock out a lot of guys bigger than him.”

Who do you think would win a fight between Conor McGregor and Georges St-Pierre? Do you agree with Miesha Tate?