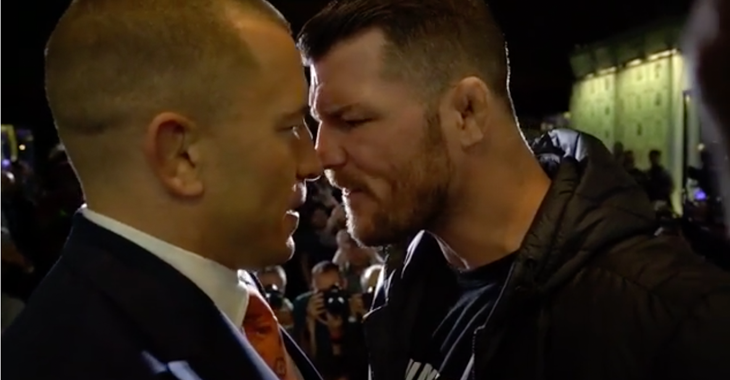 Georges St-Pierre waltzed into the UFC after being out for four years and added another ridiculous accomplishment to his career by taking the UFC middleweight title from Michael Bisping. It was a gigantic moment, but UFC 217 somehow seems like a distant memory now, especially after he dropped the title only a month later due to his health issues. As the combat sports year starts to close, Bisping reflects on the controversial aftermath of St-Pierre’s win. The former champ still thinks he’s a prick, but concedes that it was actually a really smart move.

“[Georges St-Pierre]’s a prick. He’s a prick, god bless him. I’m gonna be brutally honest here, [him vacating the title is] a double-edged sword. It’s a good thing and a bad thing. By the way, Dana White threw me under the bus when he first found out. He wasn’t happy with Georges and he said, ‘Yeah, well he cherry-picked Bisping.’ That doesn’t do me any favors! He didn’t cherry-pick me, but I did say that. I said Georges wanted to fight me because he thought I was an easy fight and this and that, and he got the win, and then he vacated the belt. Now he vacated the belt because apparently he had to go to the hospital after our fight and he thought he was gonna be paralyzed and he had a bad neck and all this type of stuff. I don’t know. He just doesn’t fancy doing it again.”

Happy to give my new middleweight belt to coach Victor. I owe a big part of my success in the octagon to the Montreal Wrestling Club & YMHA! pic.twitter.com/bHx8YPEHsM

“Remember he said in the press conferences, he said if he lost he was never gonna try again and he was gonna retire. I don’t know anything about Georges’ bank account but I’m assuming it’s pretty swollen, it’s got plenty of money in there. So he came back, he got another belt, made history, made a ton of money, made more than me, the prick, and good for him. It’s actually really smart. Why should he carry on fighting? Legacy is more important and he’s got a great legacy there. So from a business standpoint, it’s actually a really smart move. From the UFC’s perspective, of course it’s frustrating. It’s annoying. Opens the doors for [Robert] Whittaker versus [Luke] Rockhold but it’s annoying because remember, GSP did that after the Johny Hendricks fight. He didn’t defend the belt, walked away, Dana was pissed then, and now he’s doing the same thing now.”—Michael Bisping speaking on his Believe You Me podcast via MMA Fighting.

He’s not wrong. After years and years of the sport distancing itself between himself and his accomplishments, he came back and proved he’s still one of the very best pound-for-pound fighter ever. Speaking of legacy, Michael Bisping will be contemplating the last fight in his storied career as well. Although he’s lost two back-to-back, he’s fought for 14 years and beaten some of the best in the world, he has nothing left to prove anymore. His retirement fight should be huge and hopefully he gets one of — if not the — biggest pay day of his life for it.