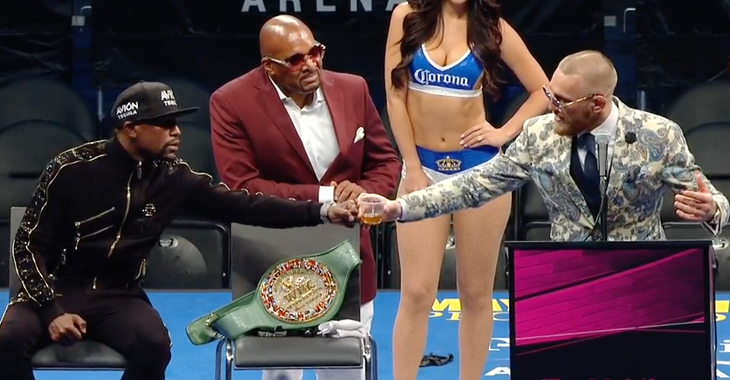 Boxing News reported on Thursday that Sky Sports confirmed that the Mayweather vs. McGregor event set a new PPV record in the U.K. Sky reported that the PPV numbers surpassed 1 million buys. The Mayweather and McGregor event broke the previous record set by Anthony Joshua and Wladimir Klitschko, who fought in April at the Wembley Stadium in London in a heavyweight boxing championship match.

In 2015, Mayweather and Pacquiao brought in 700,000 PPV buys in the U.K. and 4.6 million buys in the U.S. Showtime executive Stephen Espinoza has stated that the Mayweather and McGregor event is currently in the mid 4 million range and numbers have not yet been finalized as they continue to be tallied up.

While the numbers seem to be very far from Dana White’s 6.5 million number thrown out on social media, Mayweather and McGregor still have a good chance to break the all-time PPV record set in 2015.

As U.K. numbers continue to come in, early indications have the Mayweather and McGregor bout bringing in over £20 million, which converts to over $26 million. Prices overseas for the fight were much lower than in the U.S. as the fight was priced around $26 in the U.K. and $30 in Ireland compared to $89.95 for standard definition and $99.95 for high definition in the states.

Do you think Floyd Mayweather and Conor McGregor will end up setting the new PPV record and surpass the 4.6 million mark achieved in 2015? Let’s take this discussion to the comment section.