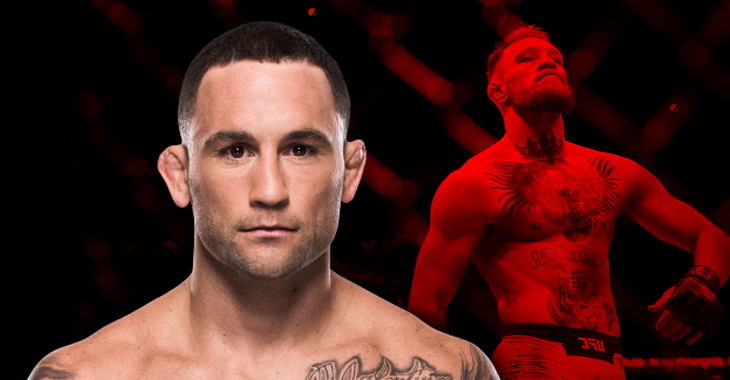 Frankie Edgar has been pretty quiet since Conor McGregor came out with the news that he offered to fight the former lightweight champion at UFC 222. It’s now been confirmed by two sources that this fight was going to be for the 165-pound title, however Edgar still says he was never approached about it. It doesn’t matter though, he says he’d fight McGregor at any weight if he was actually offered the fight.

“I woke up from a nap and I saw [news about Conor McGregor saying he was supposed to step in to fight me at UFC 222] it on Twitter. That’s the first I heard of it. I mean, come on, there is no 165-pound belt. You know what I’m saying? I want to fight on the moon. You know what I mean? Come on. [Conor McGregor] doesn’t want to defend his own belt. What, he wants to fight me? I mean, hey, that’d be great. That’d be great for me. Let’s be real. I’m not scared to fight anybody. Come on, I’ve been doing too long to be scared to fight anybody. I mean, if anything, that would be very good for me, to fight Conor McGregor.

“I would’ve fought him in any weight class, to be honest with you. I think if it was real, Dana would’ve called me personally. He’s done it before. With something like that, Dana would’ve called me personally and he didn’t, so I have to think that it wasn’t real. I don’t know, I think Conor’s just being Conor, man. He’s the best at it, right? He’s the best at making news and staying relevant. I don’t mean relevant, he’s the most popular guy in our sport, this and that, but staying in the news cycle. He does it better than anybody, except maybe Floyd Mayweather. I’m not surprised by it and I’m not getting sidetracked by it because it doesn’t matter. It’s non-news to me. Because the news is I’m fighting a guy who fights in the UFC right now, Brian Ortega.” — Frankie Edgar speaking on The MMA Hour.

When conor called the ufc he asked them create a 165lb belt. He thinks @danawhite was born yesterday. This is fact. Waiting for response Mr. Helwani. #BeefIsReal

The veteran Frankie Edgar promises he’s not getting sidetracked by the statements by Conor McGregor. He’s got his contender fight with Brian Ortega this weekend and that’s a serious match-up with a lot of stakes. After that though, he’s more than happy to fight McGregor if he’s willing to stand by his UFC 222 late replacement claims. Maybe that 165-pound division could be a thing after all, especially if Edgar loses his fourth chance at a featherweight title.