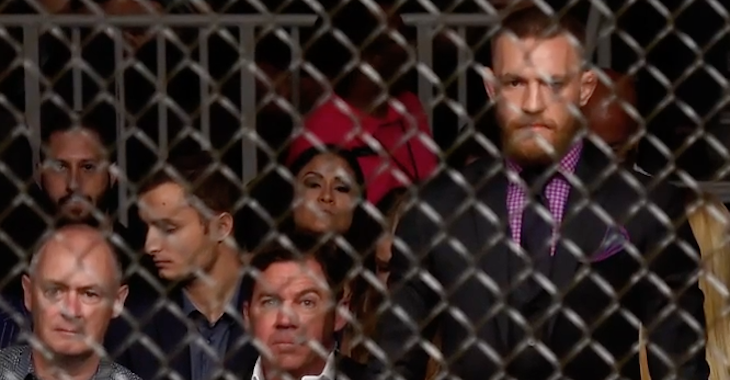 At one point in time, UFC featherweight champion Conor McGregor was set to headline UFC 200 against Nate Diaz.

With that being said, McGregor was ultimately pulled from the card for refusing to fulfill his media obligations for the event. Despite that, he was cageside on July 9th to watch as Jose Aldo and Frankie Edgar squared off for the interim featherweight championship.

Following the event, images of McGregor standing and gazing on intensely as the pair fought began going viral.

Ahead of UFC 202 this Saturday, where McGregor will square off against Nate Diaz in a highly anticipated welterweight rematch, the featherweight champ reflected on watching the Aldo-Edgar fight.

“That’s my division. My belt. And these [guys] have been talking all kinds of stuff, so I just wanted to stand up and let them know, I’m here. Let me see what the f*ck yous have. Let me see what both of you have,” McGregor said Monday on The MMA Hour. “And at the end of the fight, I’m seeing.

“Frankie can’t touch him and Aldo’s dancing around, playing it safe, and I’m saying fight. F*cking fight. You want this? You want this fight again? Take it. Win it. You can’t play it safe like that. Where’s my excitement in that? You’re running away and you’re just out-slapping him and that’s it. I want to see you come and try and get that fight and really want that fight. I didn’t see that. I saw the same thing I’ve been seeing. I saw that if we signed to fight again, he’s gone running again. That’s what I saw. So I just stood up like, I’m here, let’s see what the f*ck the two of yous have.”