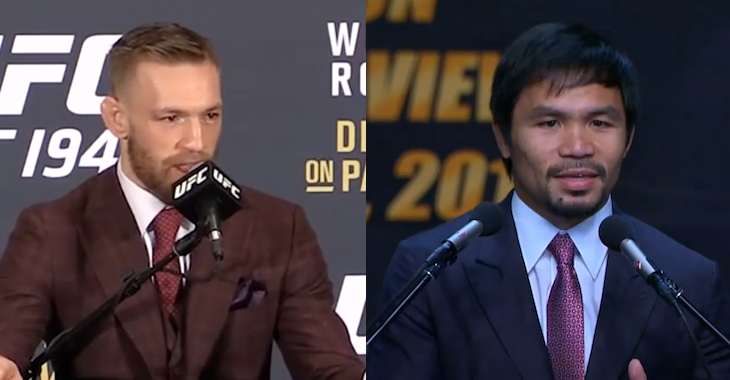 Over the last few months, the combat sports world has been abuzz with the possibility of a boxing mega fight between MMA superstar Conor McGregor and semi-retired boxing great Floyd Mayweather. Yet while this mammoth showdown appears to be closer to fruition than ever, it is still blocked by a number of massive hurdles.

As the combat sports world drools over this prospective battle, Filipino boxing great Manny Pacquiao has suggested that, if Mayweather doesn’t end up fighting McGregor, he’d be happy to welcome the Irishman to the ring.

In a recent interview with TheMacLife.com, McGregor’s main training partner Artem Lobov weighed in on this possible McGregor vs. Pacquiao backup bout, saying that he actually prefers it to a potential fight with Mayweather.

“I’m not sure how serious he took me at the time, probably not much because his mind was set on the UFC gold. That was what he wanted, so I don’t think he took it seriously but now it’s coming to light.

Lobov went on to explain his belief that Mayweather doesn’t actually want this fight, whereas Pacquiao would probably take it.

“I honestly feel that Mayweather doesn’t want the fight. Think about it this way, him and Pacquiao… it took them five years to make the fight happen and they are in the same sport. How is he now going to take on Conor, who is in his prime, is young motherfucker knocking everybody out. Mayweather is 40 now. He’s not going to risk that, but he’s making the most of it. You’re not going to find a single article in the last year about Mayweather where Conor is not mentioned.

“I feel that Conor vs. Pacquiao is a good fight to make.”

Finally, Lobov offered up his belief that, if McGregor does step into the boxing ring, he will fight from the same unorthodox stance that he has in the UFC’s Octagon – a stance that has never been used in the boxing ring. From this position, Lobov believes McGregor would take Pacquiao out inside two rounds.

“I think he will just do what he does,” Lobov said. “He will take on his own stance, his own style. It’s proven very, very effective so why change anything?”

“I know Pacquiao will take the fight,” he continued. “It’s a very realistic fight that could happen. I don’t want to disrespect Pacquiao, he’s a great fighter, but I think it would be quite an easy night for Conor. Pacquiao historically has done very bad with counter-punchers and Conor is one of the best counter-punchers on the planet. The range that he has on Pacquiao, he would just be hitting air the whole time. As fast as he is, it wouldn’t be any different.”

“Conor’s footwork, his positioning, his elusiveness, his range — it would just be too much for Pacquiao. I feel that one would be over in one or two rounds.”

How do you think a Conor McGregor vs. Manny Pacquiao fight would go? Sound off, PENN Nation!