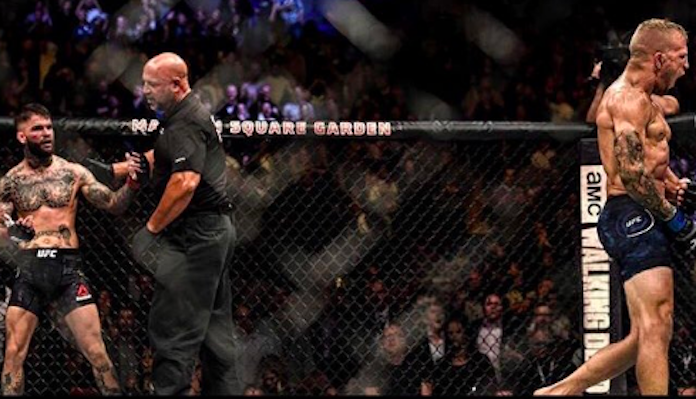 Cody Garbrandt’s time atop the UFC bantamweight mountain was brief. He won the title with a December, 2016 decision defeat of Dominick Cruz, and lost it in his first defense, succumbing to second-round punches from his arch rival TJ Dillashaw in November of 2017.

Despite the fact that Garbrandt never successfully defended the title, he was given an immediate rematch with Dillashaw, which headlined UFC 227 last Saturday night. Dillashaw believes Garbrandt got this rare opportunity because the UFC is “hard for” the former champion.

“We agreed to [a fight with Demetrious Johnson] but then he had to get shoulder surgery and so the UFC was like, ‘We don’t know how long he’s gonna be out, we want you to fight Cody [again],’” Dillashaw said on the latest edition of Brendan Schaub’s Below the Belt, explaining how the rematch came together (transcribed by MMA Fighting). “I’m still waiting for a phone call right now from my manager saying, ‘Man, the UFC wants you to fight Cody again. They think it was a fluke.’ [Laughs]. You know what I mean?

“I’m just kidding. The UFC’s put so much money and time into that kid, they loved him. They were hard for that kid. They wanted to pump him up. Even the [UFC Embedded episodes] coming up to this fight – I’m the world fucking champion and it’s about him! Dude, it’s fucking ridiculous. I’m just waiting for this phone call saying, ‘They want you to fight Cody again.’ Sweet! Pay me some more money, I’ll knock his ass out again.”

Do you think TJ Dillashaw and Cody Garbrandt’s rivalry is truly over, or will they eventually collide again?