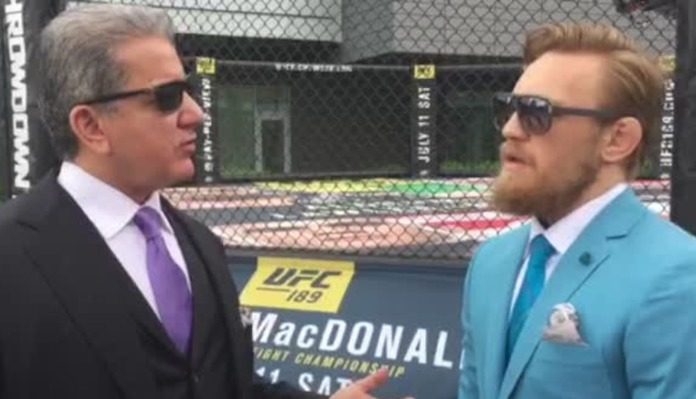 Conor McGregor‘s crazed rampage in Brooklyn generated a tidal wave of scorn, as dozens of notable members of the MMA community have spoken out against his actions. One of the latest to do so was Octagon announcer Bruce Buffer, who went off on the Irishman in an airport interview with TMZ.

“As a whole everybody’s got their own personal reaction, but I think it’s total disgust.” Buffer told TMZ Sports (transcribed by Sherdog.com). “I could say a lot of words personally, but we’ll see how it all pans out. There’s no excuse for it. It’s an insult, it’s disgusting, I mean that’s not what we’re about.”

Buffer believes there’s no excuse for the way McGregor acted in Brooklyn—certainly not his beef with long-time rival and new lightweight champion Khabib Nurmagomedov.

“I don’t care who they are, anybody that justifies that has a problem,” Buffer said. “I could say something else right now, and I want to say it, but I’m telling you they have a problem. I’m being very polite.”

The Octagon announcer also feels that, in acting the way he did, McGregor set the sport back, hindering the ceaseless efforts of everyone who has helped it evolve to its current standing in the sporting world.

“Shocked. Horrified. Never think anything like this would ever happen,” Buffer said of his reaction to McGregor’s rampage. “In my 22-plus years of being in the UFC and doing everything I can in my life to build this great brand and to support this fantastic sport from my own little niche that I do, it’s like you shit on all of us with that one move.”

Needless to say, Bruce Buffer is not particularly pleased with Conor McGregor.