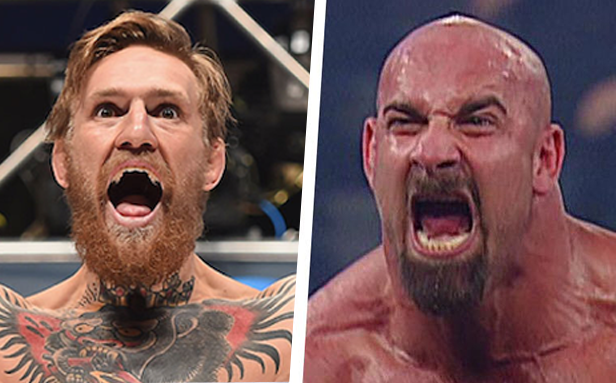 The world of professional wrestling and mixed martial arts seem to go hand-in-hand in many aspects. Although, many die-hard fans of each respective sport will tell you completely otherwise.

It is obvious from looking at the big-money mixed martial arts fighters such as Conor McGregor, that fighters must market themselves beyond just fighting in the Octagon to get their face in the spotlight. A polarizing character that fans grow to love or hate is one that will draw the most viewers and in turn, will give the fighter more leverage in negotiating pay with their promotion. “I thought the funniest thing I’ve ever seen was [Randy] Orton calling him ‘Conor McDonald’. I think that is one of the funniest things I have ever seen. Hey man, you have to embrace it. It’s the same crowd. One grows up and feeds into the other. You can’t tell me that, and I said it before, but 75 percent of the guys wouldn’t die to be professional wrestlers that are fighting, and vice versa.

“We have a lot of respect for each other, a lot of us train in martial arts and a lot of them walk around and act like they’re us. So the cross-promotion – Dana White is Vince McMahon in training. I’ve said that 20 years ago. I think it’s business, I think it’s smart business. Whether it’s, what’s her name [Ronda Rousey] at Wrestlemania, whether Conor is working this thing.

There is no doubt that Conor McGregor has kept a close eye on Vince McMahon. From copying the WWE boss’s strutted power walk, to being one of the very few people involved with professional wrestling that he said he had any respect for, it is obvious that “The Notorious” learned a thing or two from the business of professional wrestling.

With the connection between professional wrestling and professional mixed martial arts, do you agree with Bill Goldberg that the majority of athletes in their respective sports would “die” to be one another’s field of work? Share your thoughts with us in the comment section!