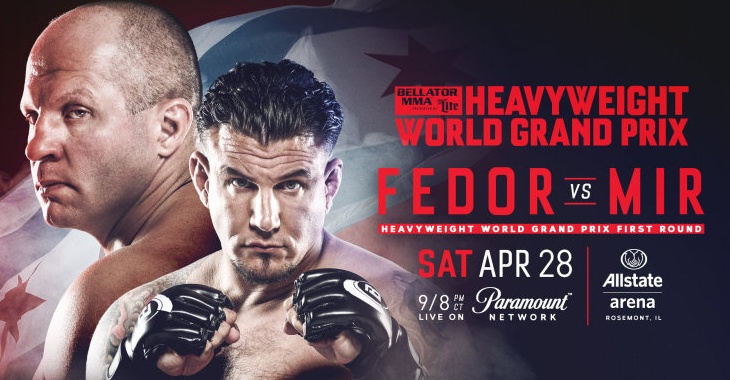 The Bellator Heavyweight Grand Prix is officially underway! This past Saturday at Bellator 192, Chael Sonnen took on and defeated the former UFC Light Heavyweight champion, Quinton “Rampage” Jackson by unanimous decision to advance to the semi-finals of the tournament. Sonnen will now move on to face the winner of the Fedor Emelianenko vs Frank Mir matchup. On the other side of the bracket is Matt Mitrione vs Roy Nelson and Muhammad “King Mo” Lawal vs the current Bellator Light Heavyweight champion, Ryan Bader.

The latter two matchups don’t yet have dates scheduled but the Mir vs Fedor fight had it’s date announced today by Bellator. The fight will take place on April 28 in Rosemont, Ilinois. The last time that MMA fans saw the former two time UFC Heavyweight champion, Frank Mir in action, he was standing across the cage from the “Super Samoan” Mark Hunt. That was in March of 2016 and a knockout loss on Mir’s end, thus extending his losing streak to two after an uneventful decision loss to fellow former champion, Andrei Arlovski.

The former king of Pride, Fedor, on the other hand, has fought much more recently. His last fight took place at Bellator 180 when he lost via early first-round knockout to Matt Mitrione. This was Fedor’s first career loss in his forty-two fights that stemmed from a knockout rather than a technical knockout as well as his first loss since 2011 when Dan Henderson defeated him in Strikeforce.

Aside from the fight date scheduling, Bellator president, Scott Coker also announced who two of the four Grand Prix alternate fighters will be. Those two fighters being Cheick Kongo, who is also a UFC veteran and has won five fights in a row including a win over current top 10 UFC Heavyweight, Alexander Volkov. The other alternate being Javy Ayala who fought Roy Nelson in Nelson’s Bellator debut. We can expect the other two to be announced sometime before the Mir vs Fedor fight.