“Lionheart” will now face arguably the biggest challenge of his mixed martial arts career when he squares off with knockout artist and former division title challenger Volkan Oezdemir at UFC Fight Night 138 on October 27 in Moncton. 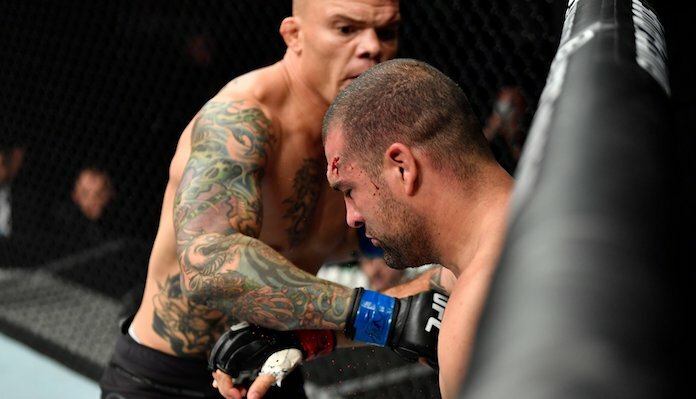 According to Anthony Smith, who has looked absolutely sensational since moving up to the UFC’s light heavyweight division, the potential of him facing former champion Jon “Bones” Jones in the near future is far greater than the possibility of him fighting Daniel Cormier.

“I just don’t want to waste my shot. I’m very calculated in the the things that I say and I mean exactly what I say. So I’m not going to waste it playing some f*cking PR [public relations] game with Daniel Cormier,” Smith told FloCombat in a recent interview. “Because Daniel Cormier is not on my radar. I have no desire to challenge Daniel Cormier to anything other than doing the right thing. You know he’s not coming back [to light heavyweight]. I know he’s not coming back.”

While Anthony Smith doesn’t believe he will ever get a crack at Daniel Cormier’s light heavyweight strap, “Lionheart” is confident that a future bout with former division kingpin Jon “Bones” Jones is definitely within his grasp.

“The chances of me fighting Daniel Cormier are about as close to zero as you’re going to get. The chances of me fighting Jon Jones could be six months away,” Smith said. “That’s the realization. Maybe USADA will come and hammer him with a four-year suspension, but I think if USADA was going to give him four years, they would have already done it. That’s my opinion. If Jon comes back and he’s back in the near future and I do what I think I’m going to do to Volkan, honestly, I think Jon Jones is probably next. I really do.”

Would you like to see a future fight between Anthony Smith and Jon “Bones” Jones if “Lionheart” can defeat Volkan Oezdemir at UFC Fight Night 138 in Moncton? Sound off PENN Nation!