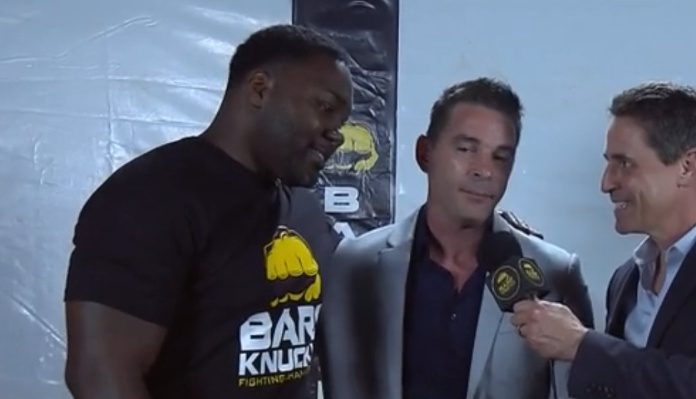 That’s right! Anthony ‘Rumble’ Johnson is officially returning to the combat sports world! But fortunately for any possible opponents, he won’t be doing so as a fighter.

At the Bare Knuckle Fighting Championship’s (BKFC) fourth event on Saturday night in Cancun, Mexico it was announced that Anthony Johnson has joined the BKFC team.

However, initially that wasn’t so clear as many who were watching the event took to social media assuming that Johnson had joined on as a fighter.

ESPN’s Ariel Helwani and Johnson himself quickly cleared that up after seeing the confusion.

“Regarding Rumble Johnson signing with Bare Knuckle FC, according to his manager Ali Abdelaziz, Johnson isn’t fighting for them. It’s an ambassador type of role. He’s still under contract with UFC.” Helwani tweeted.

“Listen I’m not fighting for Bare Knuckle…
Dope organization and I can say that because I’m here at an event now. My job is FIGHTER RELATIONS ONLY.
Who was the 1 that put it out there that I’m fighting?” Johnson’s tweet read.

For Anthony Johnson, he hasn’t fought since April 2017 when he suffered a second career defeat to the then light heavyweight champion Daniel Cormier. The man known as Rumble would surprisingly retire in the Octagon right after the fight.

Since then, Rumble has gotten into the marijuana industry as well as body building where he’s been seen to have added a substantial amount of mass to his already large frame.

Somewhat recently, Johnson and his manager have made it clear that he would like to fight again, it just has to be under the right circumstances. Those circumstances being in a heavyweight bout opposite the current champion Jon Jones who happens to be the one man Johnson never got to face in his horrifying run at 205-pounds.

The two were set to meet at UFC 187 in May 2015 but due to Jones’ hit and run incident, he was removed from the bout and stripped which led to Johnson’s first encounter with Cormier.