Angela Lee will defend her atomweight title against Stamp Fairtex at ONE: ‘X’ on March 26th. The Thai earned her shot at the champ by winning the ONE Women’s Atomweight world Grand Prix in December. The former ONE Muay Thai and kickboxing champion pulled off a big surprise when she submitted Ritu Phogat in the final.

Currently 9-2, that was only Stamp’s second submission victory. She only had her first pro MMA fight in 2018 and her skillset has evolved rapidly. Like Stamp, Angela Lee won her first world title in ONE when she was still just a teenager. She took the atomweight crown with a unanimous decision win against Mei Yamaguchi when she was just 19.

Since then, Stamp has always been an admirer. And the 24 year old recently told media that Lee is ‘still her idol’ despite the fact that they’re due to fight each other. 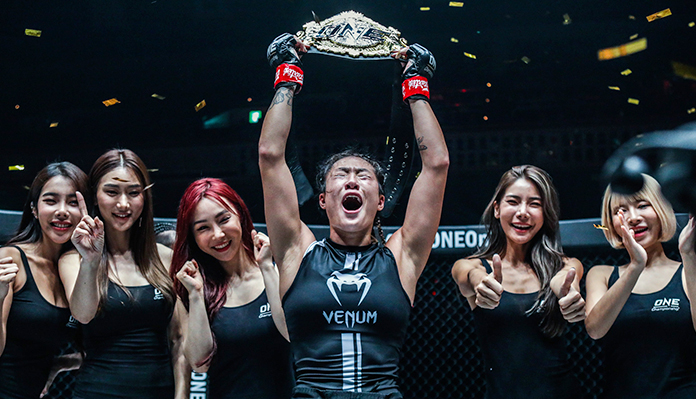 Speaking exclusively to BJPenn.com, Lee was asked her opinion on fighting an opponent who reveres her so much.

“It’s cute. I think that she’s very sweet,” said Angela Lee. “I see a lot of myself in her. It’s a lot of similarities to when I was starting out in my career and it kind of reminds me of that. She’s so talented and she’s accomplished so much as at such a young age,” added the champ.

Lee will be making an eagerly anticipated return to competition having last fought in 2019. On that occasion, she successfully defended her belt against long-term rival Xiong Jing Nan with a dramatic rear naked choke submission coming in the dying seconds of round 5.

The 25-year-old since took a hiatus to give birth to her daughter, and as she gears up to glove up for the first time in almost two and a half years – she believes she’s stronger than ever.

“I do believe ‘Mom strength’ is a real thing. If not because of everything your body has gone through but mentally as well you are having to take care of this human who’s dependent on you. We’re training two-three times a day. I’m sore, I’m tired. Before I’d need to take naps…I’d be exhausted. Now when I’m free I just spend time with my daughter. You just have so much more strength,” said Angela Lee. 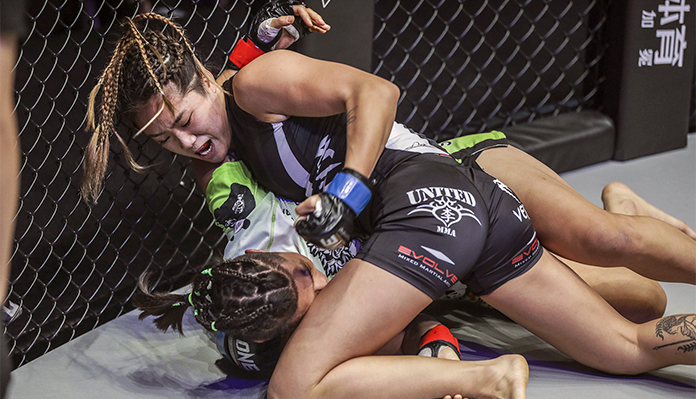 ‘Unstoppable’ is the only woman ever hold the belt and has never lost a fight at atomweight. If she beats Stamp, then it looks likely she’ll face strawweight champion, Jing Nan. And both women say they’re keen for a third go after going 1-1 in their first two meetings in each weight class.

Will Angela Lee retain the belt – and if so, should she face ‘The Panda’ and atomweight or strawweight?