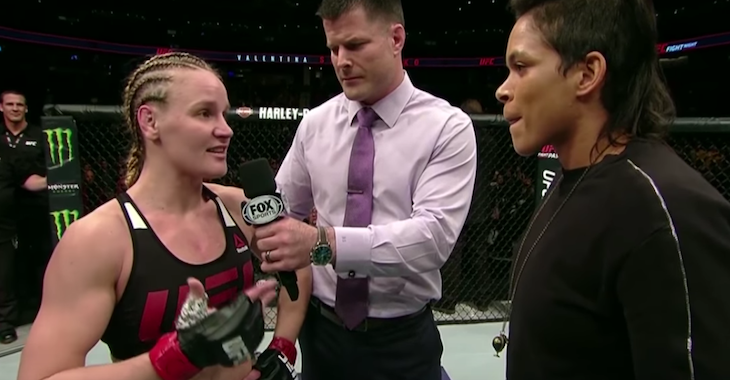 When Valentina Shevchenko submitted Julianna Pena with a second-round armbar back in January, she earned herself a crack at Amanda Nunes and the UFC women’s bantamweight title. While the Kyrgyzstani fighter’s title shot has been confirmed, however, the date and location of this fight are still not known.

On Sunday evening, Nunes did her best to change that, inviting Shevchenko to scrap for gold at UFC 212, which is scheduled for June 3.

I see you June 3? @BulletValentina

Given that UFC 212 will occur in Rio de Janeiro, in Nunes native Brazil, it initially looked like a pretty sensible setting for this next women’s bantamweight title fight. Apparently, however, it’s not going to work for Shevchenko. On Monday, the challenger responded, saying that she was offered an April date with Nunes, which would have worked for her, but that Nunes declined. She then explained that when this April showdown fell through, she booked her scheduled through to July, which of course nixes the possibility of a title fight at UFC 212 in June.

UFC offered fight in Apr, you declined. Was told U would be back July. My schedule planned till July. Any where/anytime in July @Amanda_Leoa

This response from Shevchenko was not well received by Nunes, who rebutted by saying it is not the challenger’s place to pick and choose the date of a title fight.

A challenger doesn't pick the day. The challenger is just supposed to fight. @BulletValentina

Nunes will enter this title fight with Shevchenko having recently mauled Ronda Rousey to a first-round knockout, which marked her first defense of the women’s bantamweight title. Prior to this defeat of the superstar Rousey, she won the title with a first-round submission of Miesha Tate. Nunes earned her title shot by defeating Shevchenko with a competitive decision in early 2016.

Shevchenko has rebounded from this close decision loss to Nunes with a decision defeat of former champion Holly Holm, and more recently, her decisive defeat of Julianna Pena.

Who do you think comes out on top when Amanda Nunes and Valentina Shevchenko finally agree on a date and battle for UFC women’s bantamweight gold? Sound off, PENN Nation!