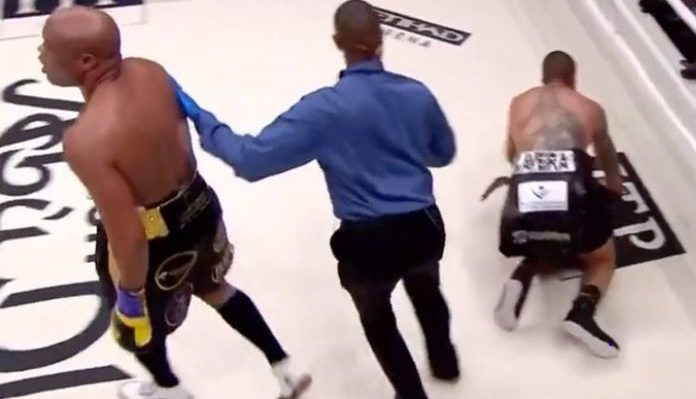 Silva and Machado squared off in an eight-round contest at 194-pounds this evening in Abu Dhabi.

‘The Spider’ had last competed in September of 2021, where he scored a nasty first round knockout win over Tito Ortiz (see that here). That victory was preceded by a dominant decision win over former WBC middleweight champion Julio Cesar Chavez Jr.

Standing across the ring from Anderson Silva was fellow MMA fighter Bruno Machado, who took the bout on short notice.

Tonight’s bout resulted in another stellar performance from the 47-year-old former UFC champion. Silva looked sharp in the opening rounds of the fight and scored a nasty knockdown in the fifth round.

Despite being dropped hard, Bruno Machado battled through the adversity to see the final bell.

Because the contest was an exhibition, no winner was declared in tonight’s Silva vs. Machado bout. With that said, it would have been a clear victory for Anderson Silva.

It will be interesting to see what comes next for ‘The Spider’ following tonight’s contest with Bruno Machado.

Rumors have been swirling about a possible pro boxing match against Jake Paul, but nothing has been made official as of this time. ‘The Problem Child’ has gone 5-0 in boxing, defeating MMA notables Tyron Woodley and Ben Askren.

Who would you like to see Anderson Silva fight next?