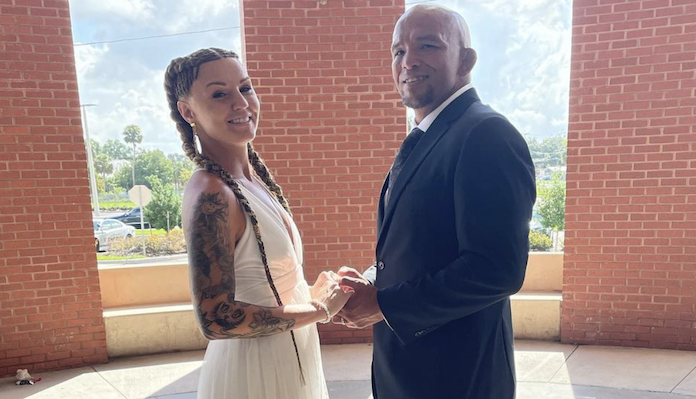 BKFC stars Joey Beltran and Britain Hart recently announced that they were married before this past Friday’s BKFC 19 event in Tampa, Florida.

Beltran, a former UFC heavyweight fighter who is the current BKFC heavyweight champion, took to his social media to announce that he tied the knot with Britain, a women’s fighter for BKFC who earlier this year defeated Paige VanZant in an upset. The two combat sports stars posted a number of photos from them tying the knot in the days before BKFC 19.

We decided to choose us today. I remember after the first day I met you @teambritainhart I knew you were my one. 2 days later I remember telling @adam_castro_boxing I think I’m gonna marry Britain Hart. Today we made it official. I couldn’t be happier to marry the person that knows me the most and is my best friend! I love you Britain cheers to forever

Beltran most recently fought Sam Shewmaker at BKFC 18 and he won the fight via unanimous decision. As for Hart, she defeated Jenny Savage via third-round TKO at BKFC 19 this past weekend, just a couple of days after she was married to the love of her life. Both Beltran and Hart have become big stars for BKFC, an emerging promotion in the world of combat sports, and to see them find each other and find love is definitely nice to see.

One would imagine that Beltran and Hart will take a few months off to relax and enjoy their new marriage considering both of them have fought within the past month, but knowing how much these two love to compete, it shouldn’t surprise anyone if they fight again soon.

We here at BJPenn.com would like to congratulate the happy couple Joey Beltran and Britain Hart on their marriage.