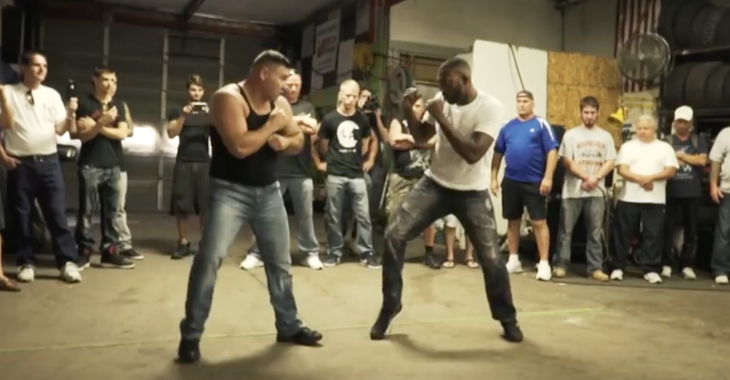 In the early 90’s MMA was brought out of the underground and into the spotlight as it fueled the cravings for hungry Combat Sport fans in America. At a time when MMA was illegal in the U.S and competition was being held in wear houses, clubs and anywhere it could be organized out of the view of the public and more importantly, the authorities. Like BKB, MMA competitions had been organized in the U.S for many years, prior to the sport becoming accepted and a full blown mainstream sport.

But, in the early 90’s a couple of shroud entrepreneurs with a vision to see the potential for the market by creating an MMA Organization to feed the hunger of demanding combat sports fans in America, came the birth of what we know today as the UFC.

In the early years of the UFC, the sport of MMA in the U.S was still very much an illegal sport. But that didn’t stop the vision of a couple shroud entrepreneurs and demanding combat sports fans from quickly raising the popularity of MMA. A loophole was found to work around the state commissions and the sanctioning board. The sport found a safe haven by holding competitions on the many Indian Reservations through out the U.S. And out of reach from state officials.

As the popularity and the demand for the sport grew, state commissioners along with sanctioning body’s started to see the massive potential to sanction and regulate the sport. The UFC became a legal and sanctioned sport one state at a time until today as we know it to be a legal International Combat Sport and sanctioned in all 50 states. Within only 20 short years, the UFC is now the fastest growing sports franchise in history. And after the sale of the franchise just this past summer for $4.4 billion dollars, it became the worlds most valuable franchise to date. In 2011 came the birth of ONE Championship when another couple of shroud entrepreneurs sought out to capitalize on the Thriving International Combat Sports Market. ONE Championship was organized and quickly rose to the top of the Asian Sports Market feeding the cravings for hungry Combat Sports fans who couldn’t get enough of Professional MMA competition. In only 5 short years ONE Championship is the fastest growing Franchise on the market and valued at around $1 billion and a publicly traded company on the stock market. The hunger for Combat Sports is reaching unprecedented numbers as it continues to grow in mass popularity from demanding fans all over the world.

Just like MMA once was BKB was outlawed when it became illegal over 125 years ago. This didn’t stop BKB competitions from taking place in the same types of places that MMA competitions once were held. Every weekend in the U.S from New York to California BKB events have been organized in the underground world being held in wear houses, clubs and anywhere they could be organized outside the publics view and even more importantly outside the view of state authorities.

Bobby Gunn, a former Cruiserweight World Champion and seasoned veteran Bare Knuckle Boxer had been fighting in some of these underground competitions for years. He took on a well respected Professional Boxer by the name of Rich Stewart. What neither of these fighters realized is that they would be competing in a historical event which would lead them to being eligible for the vacant Heavyweight BKB World Championship Belt ” last held by the late John L. Sullivan the first World Champion ” and ultimately the opportunity to be inducted into the Hall of Fame. On that day, Gunn was the victor of the match and become the first Bare Knuckler in 123 years to reign supreme and become the holder of the most sought after Title Belt recognized in the history of boxing, the Prestigious John L. Sullivan’s Heavyweight BKB World Championship Belt and ultimately he became the first living Bare Knuckler ever inducted into the Hall of Fame.

The BKF Championship Was Born

But because the sport was very much still illegal, there was still many challenges that BKF had to face with state legislatures and commissions to convince them that if organized properly a BKB Organization could very well be a professional and regulated sport But these hurdles wouldn’t stop a couple of shroud entrepreneurs and the World BKB Champion from plowing forward to make BKB a Mainstreamed and sanctioned sport.

After a long uphill battle, these entrepreneurs along with the BKB World Champion Bobby Gunn, is pioneering the way for what will be the next Billion Dollar Combat Sport Franchise to enter the market. The BKF Championship has received the graces and approval from several states within the U.S and several different countries thus far.

With the new cross over appeal that the new owners of the UFC are planning to transition the sport of MMA into the BKF Championship will feed the hungry Combat Sports Fans with pure adrenaline and excitement with raw stand up exchanging of blows with real authentic Bare Knuckle competition.

The timing was crucial for the BKF Championship to enter the Thriving Combat Sports Market that they stand to gain a huge share of the International Sports Market when they Debut with BKF Championships beginning in the U.S prior to their International tour to bring their Franchise Worldwide. It won’t be long before BKB is legal and a sanctioned sport regulated here within the U.S and Worldwide before the inevitable happens within the next couple years the BKF Championship will undoubtedly be the Next Billion Dollar Franchise.