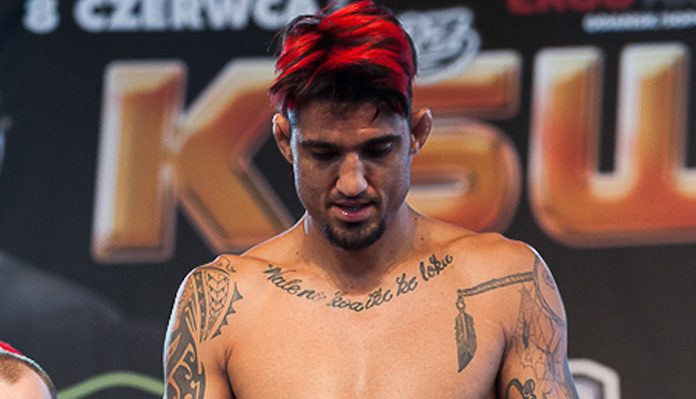 Bare Knuckle FC 3 took place this past Saturday in Biloxi, Mississippi and featured a handful of MMA veterans including Kendall Grove and Joe Riggs.

The pay-per-view event was headlined by a heavyweight championship fight between tournament finalists Arnold Adams and Sam Shewmaker.

In the co-main event of the evening, former UFC and Bellator standout Kendall Grove took on Marcel Stamps.

Unfortunately for fans of the Hawaiian, Grove suffered a brutal knockout loss to Stamps at this weekend’s event.

With the loss, Kendall Grove falls to 1-1 under the BKFC banner. “The Spider” had won his promotional debut against Bruce Abramski via decision this past August.

Marcel Stamps knockout of Kendall Grove was not the only sensational finish to occur at Bare Knuckle FC 3. Elvin Britto scored a jaw-dropping fifth-round knockout victory over Harris Stephenson at the event. See that below.

Get all of the Bare Knuckle FC 3 Results below:

Sam Shewmaker vs. vs. Arnold Adams — Adams def. Shewmaker by Split Decision (Heavyweight Championship)
Kendall Grove vs. Marcel Stamps — Stamps def. Grove by KO at 0:47 of Round 3
Johnny Bedford vs. Matt Murphy — Bedford def. Murphy by Unanimous Decision
Dillard Pegg vs. Rusty Crowder — Crowder def. Pegg by TKO at 0:33 of Round 2
Joe Riggs vs. Brock Weaver — Riggs def. Weaver by Unanimous Decision
Abdiel Velazquez vs. Shawn West — Velazquez def. West by TKO at 1:16 of Round 1
Christine Ferea vs. Jennifer Tate — Ferea def. Tate by TKO at 1:55 of Round 1
Harris Stephenson vs. Elvin Britto —Britto def. Stephenson by KO at 0:06 of Round 5
Aaron Brink vs. Mike Bissett — Bissett def. Brink by TKO at 1:21 of Round 1