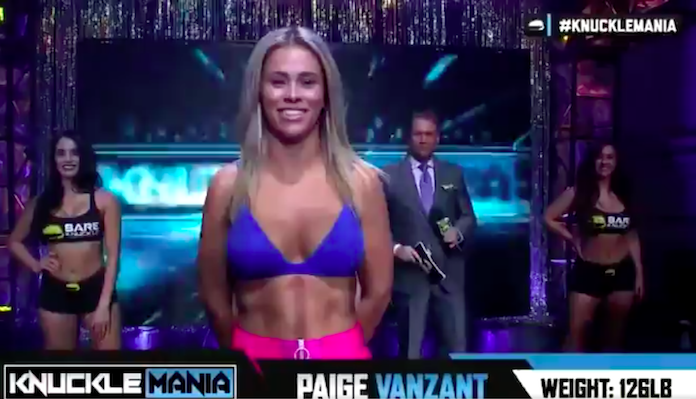 Women’s superstar Paige VanZant got into a heated shoving match with rival Britain Hart at the BKFC 16 weigh-ins on Thursday night.

VanZant, the former UFC women’s star, surprised combat sports fans when she decided to take her talents to BKFC. On Friday night, she takes on Hart in a fight that got very personal at the official weigh-ins. VanZant made weight, coming in at 126lbs, and Hart did, too, coming in at 124.4lbs. During the staredown, things got testy when the two rivals engaged in a shoving match. Check out the video below.

Some drama at the #KnuckleMania weigh-ins

The sportsbooks have VanZant listed as a -150 betting favorite (bet $150 to win $100) while Hart is a +120 betting underdog (bet $100 to win $120). Clearly, there is no love lost between these two and this should be a very entertaining matchup. VanZant has had a lot of critics in the lead-up to this fight so she has a lot to prove here, while for Hart she will look to play spoiler and take out the VanZant hype train.

On the undercard, former UFC middleweight Chris Leben takes on Quentin Henry in a heavyweight bout. The former UFC fighter Leben weighed in at 204.6lbs for the fight, while Henry weighed in at 205.2lbs. As well, former UFC bantamweight Johnny Bedford takes on Dan Nguyen, with both men making weight. Check out the official BKFC: VanZant vs. Hart weigh-ins below (h/t Jesse Holland at MMAMania.com). The card takes place on pay-per-view on Friday night. The PPV price is $39.99.

Are you going to watch BKFC 16 and the debut of Paige VanZant?