’12 Gauge’ has been out of action since her decision defeat to Rachel Ostovich last July. The defeat was a devastating one for the former UFC star, as it dropped her to 0-2 in BKFC. She was previously defeated by Britain Hart in February.

Since then, the former UFC contender has enjoyed her time out of the ring. VanZant notably signed to All Elite Wrestling and had a match at Double or Nothing in May. In addition to that, the BKFC star has famously found success on her own subscription platform.

Earlier this month, BKFC’s David Feldman announced that Paige VanZant would return on February 27th in New Mexico.  As of now, the UFC veteran’s opponent has yet to be revealed. Furthermore, the fight is reportedly the last on her contract with the bare-knuckle boxing promotion.

However, before she returns to the BKFC ring VanZant apparently has an appearance booked. VanZant is slated to appear at the Sapphire New York Gentleman’s Club on December 16th, as first reported by MyMMANews. 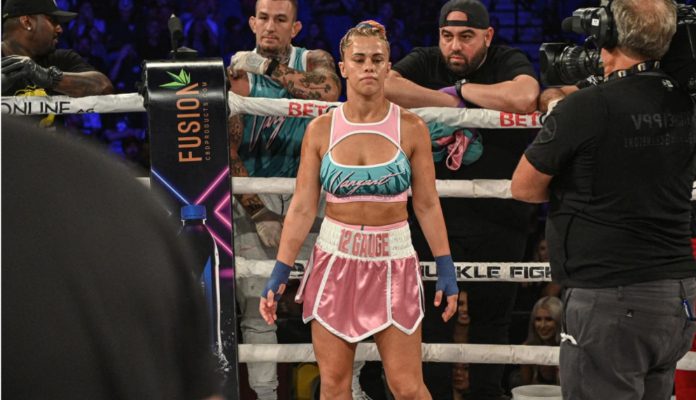 “The All New Friday Night Idol at Sapphire 39!” read the description for the event on the club’s website.  “Weekly Super Star Appearances, Only Fans Sensations and Social Media Stars will be hosting at Sapphire 39! Sexy Sapphire Contests and the opportunity to hang with the biggest names in the Adult Industry. Get ready because this Friday Night Party is no ordinary event! You can book your favorite Idols for a special personal dinner package!”

The event is limited to adults over 21 years old. As of now, it’s not clear if this is a one-off appearance for VanZant, or if she has a working relationship with the New York-based club.

This article appeared first on BJPENN.COM
Previous articleDana White details injury that forced Jiri Prochazka to withdraw from UFC 282 and vacate his title: “The worst shoulder injury the doctors have seen in UFC history”
Next articleJeremy Stephens aiming for KO win over Natan Schulte at PFL 10 in honor Anthony Johnson: “The guy knocked people out so they don’t f*cking move”
© Newspaper WordPress Theme by TagDiv