Home » UFC NEWS » Wrestling World In Shock After Being Dropped From ... 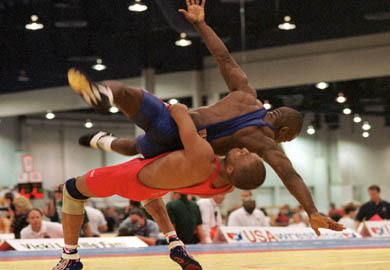 Today the executive board of the IOC (International Olympic Committee) announced it has decided to exclude wrestling from the 2020 Olympic Games. After a thorough assessment of all 26 sports at the 2012 London Games, it seems that wrestling was the least fit to continue. This comes after speculations that Taekwondo or Modern Pentathlon would get the axe.

Although wrestling was the final choice for the exclusion, it does have a chance to win a reprieve when the IOC meets in South America to ratify their decision this September. It looks like wrestling will now be competing with wushu, karate, squash, roller sports, wakeboarding, sport climbing, and baseball/softball for a coveted place in the 2020 games. However, it is extremely unlikely wrestling will get voted back in so soon after its removal.

FILA, the world governing body for amateur wrestling, made a statement on their website: “FILA will take all necessary steps to convince the executive committee and members of the IOC of this aberration of a decision against one of the founding sports of the ancient and modern Olympic games.” It is no secret that the sport of wrestling has helped the Olympics grow into the event it is today. After all, wrestling was part of the 1896 inaugural modern Olympics in Athens, and has been an integral part of every Olympics with the exception of Paris in 1900. Last year, London’s Olympics featured 344 wrestlers competing in 11 medal events.

Olympic inclusion is absolutely essential to the sport of wrestling. Every wrestler spends their entire career striving towards a chance to compete in the Olympics. Furthermore, wrestling is a huge sport internationally, thriving in countries such as Russia, Iran, Cuba, Georgia, Turkey, Japan, and India, amongst others. What was going through the minds of the IOC’s executives to make such an awful decision? It’s a sad day for wrestling.