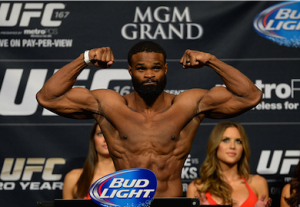 “[Carlos Condit] point fights. He doesn’t just come out there and start banging on people. That’s not his style. He comes out there, and he overwhelms you with volume. He point fights. I don’t think (Rory) deserves a world title fight. He didn’t want to fight the champion when he was there. But now all of the sudden GSP hangs it up for a little bit, and he wants to jump in [to a title fight]. Not sure about that… Maybe Dong Hyun Kim and Rory MacDonald should fight each other.”

In a recent interview with MMAjunkie.com, top UFC welterweight fighter Tyron Woodley, touched on his upcoming fight against Carlos Condit and the state of the UFC’s welterweight division.

Catch Woodley in the UFC 171 co-main event next Saturday on pay-per-view.