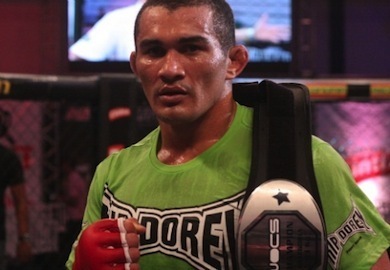 Jiu-jitsu ace and UFC newcomer Robert Drysdale was recently forced out of his UFC 163 bout with Ednaldo Oliveira (13-1-1, 1 NC) with a staph infection.

Now, his former opponent, Ednaldo Oliveira, has been given a new challenger to face on August 3rd.

That new challenger, like Drysdale, is also promotional newcomer as Francimar Barroso (15-3) has stepped up to make his UFC debut, in the biggest fight of his career.

Barroso is riding in on a three-fight win streak and has only been to decision once in his career. He holds eight knockouts and six submission victories and has only lost by knockout in all three of his losses.

Needless to say, if Barroso can get past the dreaded ‘Octagon jitters’, this will make for an exciting bout.

Oliveira hasn’t fought since UFC 142, dropping his first professional fight to UFC veteran, Gabriel Gonzaga. Since then, Oliveira has been marred by injury and unable to make his return.

UFC 163 takes place on August 3rd at the HSBC Arena in Rio de Janeiro, Brazil. It will be headlined by a featherweight title fight between the chamion, Jose Aldo, and challenger, Chan Sung Jung. The Oliveira vs. Barroso bout will take place on the Facebook preliminary card.

This article appeared first on BJPENN.COM
Previous articleEd Soares Says ‘Super Fights’ are Still in Anderson Silva’s Future
Next articleDan Hardy Chimes In On Fighter Compensation And Why Fighters Are Devalued
© Newspaper WordPress Theme by TagDiv