Home » UFC NEWS » With Browne In The Picture, Marine Hoping Ronda Do... 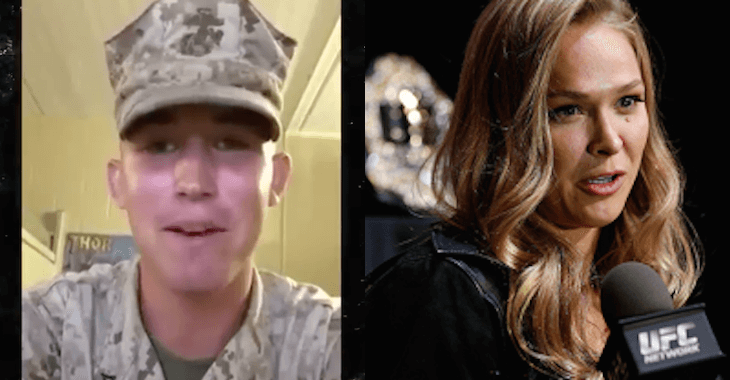 A little while back a Marine, by the name of Jarrod Haschert, decided to send out a video of him asking UFC champion Ronda Rousey to the Marine Corp Ball. Well, it worked.

The video went viral and it eventually got back to Rousey, who then agreed to go if he could find dates for the rest of the Four Horsewomen.

Well now, after the big news that UFC heavyweight Travis Browne and her are dating, Haschert is hoping that the champ doesn’t back out of going to the dance with him.

After the relationship was confirmed, by both Browne and Rousey, TMZ reached out to Haschert to get his reaction. He didn’t have much to say, only, “Damn. I really hope she doesn’t back out.”

They also jokingly asked him if he would fight Browne for Rousey’s affection he said:

“That would be a tough fight! She’s a great woman with an amazing personality. I’m sure he’s a great guy.”