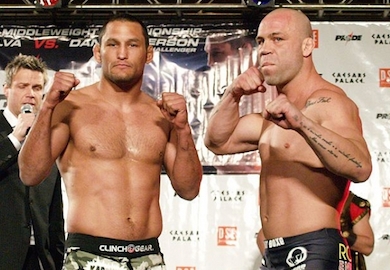 “I want to be back soon to make the 50th fight of my career. I would like it to be in a special card. It’s not news that I want to face Vitor Belfort or Chael Sonnen. But Dan Henderson is other guy that I want to fight, it’s a viable possibility. We’re 1-1 tied and it would be nice to have a tiebreaker of our score. In my last fight at Pride, I lost my belt to him and I couldn’t have a rematch because we left. If this fight happens, I’ll ask him to bring the belt so the winner can have it after the fight.”

“This fight could happen in any place of the world. It would be beautiful to happen at a soccer stadium in Curitiba, Brazil, where I’m from. The UFC are promoting a lot of cards and there are a lot of fights that people even don’t know that will happen. But Wanderlei Silva vs. Dan Henderson would sell very well. A bout between champions has to be considered a big show.”

In a recent interview with the Brazilian media, Wanderlei Silva called for a trilogy with PRIDE FC rival, Dan Henderson.

I'm good with it, what do you guys think? RT @luis_coutinho: @wandfc wants trilogy against (cont) http://t.co/QkRK0K9XlP