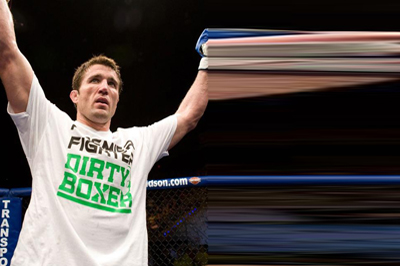 When Chael Sonnen talks, people tend to listen. If you have a camera or a microphone and Chael Sonnen is in the room, you better hide it because he will do whatever he can to create more buzz about his upcoming fight, simply because that’s what he does best. Whether you love him or hate him, every time he has a media appearance he has the uncanny ability to make people want to pay to see him get dominated or walk away with the victory.

Chael Sonnen recently appeared on Joe Rogan’s podcast “The Joe Rogan Experience” and chatted away with the UFC commentator and stand-up comedian for almost three straight hours. While some may stay away form the podcast in fear of having to hear Chael Sonnen in character for three hours, it’s interesting to note that the Sonnen that showed up was not looking to increase the PPV buy-rate for his upcoming bout, nor did he cut any professional wrestling promos. Joe Rogan brought out the best of his interviewee, and Sonnen sounded like a real person. The interview between the two was very candid and addressed a number of serious topics (as well as a few silly ones) including how Chael Sonnen overcame the mental block that allowed him to be the trash talker he is today.

They approached the subject of what Chael Sonnen really would have thought went down if his rematch with Anderson Silva took place in Brazil in front of 80,000 to 100,000 screaming natives as originally planned, and Sonnen responded very honestly:

“It would’ve been a scene. I don’t think they could’ve controlled it. They swore that they could, they’d have presidential security there, they were planning on having the President of Brazil there, so they’d have their secret service. It’s like, ‘guys, you can’t do it.’ There was just a soccer game and 73 were trampled to death. You can’t control a crowd when they decide to storm, you just can’t. It’s displaced responsibility. You can’t control that, especially when I’m the main event. And the relevance to that is, it means the beer started pouring five hours earlier. So now your not only talking about an insightful crowd, you’re talking about a drunk crowd.”

Rogan continued on and asked him what he thought would have happened if Chael Sonnen beat Anderson Silva in his native country:

“I think it would have been very, very bad. And I would not have backed off one bit. Because I’m not gonna change; I’m gonna dance with the one that brought me. I’m going to be aggressive, I’m going to be in your face…I’m going to do my job as soon as Bruce Buffer gets out of my way. And I can’t change, I don’t know how to change. This is what I’m programmed to do. I hate to talk like one of those maniacs, ‘I’d have given my life blah blah blah,’ but Joe, I swear to you, hand to God, I’d have given my life to win that championship if I had to.”

“Let’s not forget, this isn’t tough guy talk. I signed the contract to go to Brazil to do the fight, and in my heart I thought, ‘I don’t know how this is gonna go.’ I made my mother promise she wouldn’t go. My mother doesn’t get it, she’s an older woman. She’s got a ruby or a diamond on every finger, you know, you don’t go into South America like that, let alone a fight. It was just one of those deals, but look, this is what I’m gonna do.”

Chael Sonnen and Anderson Silva are set to headline UFC 148