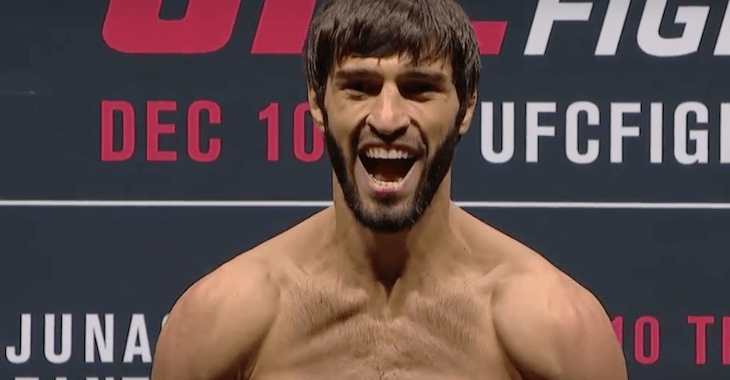 A featherweight bout between Zubaira Tukhugov (18-3 MMA) and Phillipe Nover (11-16-1 MMA) served as the second bout of UFC Fight Night 80 in Las Vegas.

The fight started slowly, as both men struggled to find their range.

Tukhugov was able to land some decent kicks on Nover and scored a solid trip to finish off round one.

Round two starts and Nover is able to land a solid body kick on Tukhugov. The Russian fires back with some solid kicks and punches of his own.

Another solid body kick lands from Nover, but Tukhugov just eats it and presses forward with strikes.

Big over hand right from Tukhugov! Nover looks to be in trouble but is able to survive Zubaira’s onslaught.

Round three begins and Tukhugov is stalking Nover. The Russian is able to land some decent strikes in round three but Nover utilized some good footwork to avoid his big strikes.

The bell sounds to end round three and it looks as if Tukhugov has done enough to get the win.