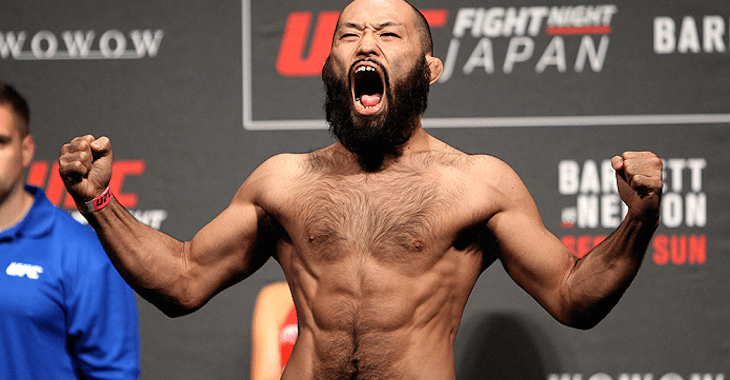 In the first round Anzai came out flashing his jab quite a bit. Zapata threw a big head kick but Anzai ducked underneath and then got Zapata clinched on the cage. Zapata managed to break away but just moments later Anzai got him back on the cage. This time he was able to get Zapata down to the mat. Zapata was sitting up, with his back on the cage, while Anzai worked with Zapata’s legs wrapped between his. Zapata was able to get back to his feet, but Anzai stayed in control and kept him on the cage. They both landed short shots, knees and punches in the clinch. Anzai went for a take down and Zapata grabbed the cage big time. He held himself up and then was able to break free. They exchanged briefly, but then it was again Anzai getting Zapata on the cage in the clinch. Because of the clinching and the takedown it was obviously Anzai’s round.

In the second they exchange. Zapata landed a nice body kick. It was clear Anzai just wanted to get this fight down. He continued to shoot in, pushing Zapata back to the cage a few times. This round Zapata was able to get off the cage faster. Zapata again threw a massive head kick, but again Anzai ducked down at the perfect time to avoid it. He was then able to get Zapata on the cage, and down to the mat. Anzai worked from full guard. During a scramble Anzai seemed to be able to get the back of Zapata, but then he scrambled again and got out of it and to his feet. Zapata then tried for a takedown on the cage, but was unable to. They broke away, but Anzai was relentless with the shots and again put Zapata up against the cage in the clinch.

In the third Anzai came out flashing that weak jab, but it was clear he was just waiting to shoot in. In a strange move, Zapata threw a punch, then grabbed his hand and turned away in pain. Anzai, like any other fighter rushed in to finish. The referee stopped them called a time out. Zapata was trying to wave him off as to say he was fine, but they had the doctor come in. It seemed like Zapata wanted no part of talking to the doctor, he just kept walking around, holding this hand. The referee eventually waved it off, ending the fight. It looks like it might be a dislocated finger.