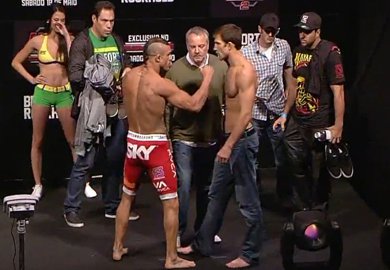 The CABMMA (Brazilian Athletic Commission) and the UFC have released the results for the drug tests from UFC on FX: Belfort vs. Rockhold. All the tests came back negative.

“The UFC has been informed by CABMMA that all fighters on the UFC on FX 8 card passed their pre- and post-fight drug tests,” today’s announcement read. “The UFC fully supports the drug testing efforts of all regulatory agencies. All fighters are drug tested at every event and the organization maintains a strict, consistent policy against the use of any illegal and/or performance-enhancing drugs, stimulants or masking agents.”

The main event that night was a middleweight bout between Vitor Belfort and Luke Rockhold, a fight that won’t soon be forgotten, as Belfort won with a spinning-heel kick to the head followed by punches on the ground to finish the job.

Vitor Belfort has been infamously making waves with his use of testosterone-replacement therapy. The therapy is frowned upon by some fighters and UFC president Dana White himself but is allowed through acceptance in to the testosterone-use exemption program.