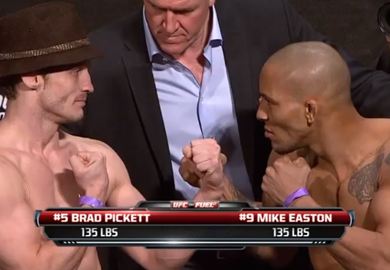 Brad Pickett and Mike Easton took part in an exciting back and forth display of mixed martial arts. Both showcasing their fantastic stand up abilities as well as their wresting and ability to work off the fence.

The two were very even after the first two rounds, scoring strong punches and kicks, and both landing take-down’s but not establishing much control on the ground.

In the third however, Easton looked to bring it to the mat throwing Pickett to the ground but Pickett quickly reversed his position to get top control and find himself in Easton’s guard where  he spent a good amount of the round.

The fight ended with the two on their feet and after three rounds Brad Pickett defeated Mike Easton via Split Decision.