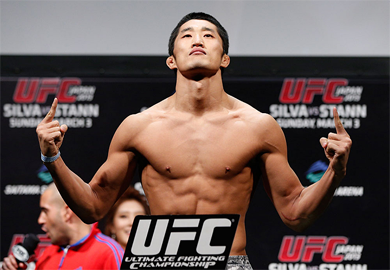 In the opening bout of the main card a welterweight bout between Siyar Bahadurzada and Dong Hyun Kim kicked things off on FUEL TV.

In the opening frame of action the two fighters engaged in a brief stand-up exchange before the Korean born fighter took the fight to the ground around the midway point where he held a decisive advantage in the grappling range.

In the second frame DHK didn’t play on the feet really at all like he did in the first and quickly took the bout to the ground where he pressured with ground and pound from the mount position for the pretty much the full frame of action.

In the third Kim took Siyar down almost instantly again where he easily transitioned to mount and won the final frame just like the prior two to win the fight.