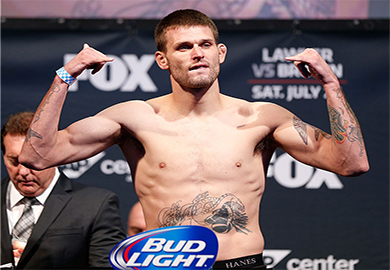 Hernani Perpetuo impressed those in attendance with his “punches in bunches” in the opening round of the fight. His strategy was unorthodox, but it could have been effective if implemented right. He would load up with six or seven powerful punches, then back off for twenty seconds or so. This is a method of attack that will eventually tire the attacker and in a fight that goes the full fifteen minutes, the attackee will benefit if patient.

Tim Means was patient and survived a tough first round to take control of the rest of the fight. The second round was all Means and his leg kicks really started to bruise the inside of Perpetuo’s legs. Means dictated where the fight went in the second and third rounds and controlled the pace of the action which means a lot in the eyes of the judges.

Perpetuo likely suffered a broken left hand or arm in the third round because every single punch he threw was with his right. He continued to goad Means into being aggressive and attacking, but Means stayed methodical and picked his shots.