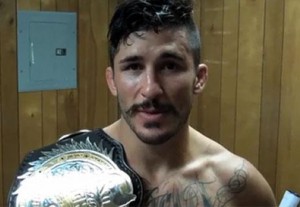 I guess when you employ more than 300 fighter’s it’s easy to compile a list of a few bad seeds or guys with legal issues.

In the most recent case of fighter-gone-bad, UFC Flyweight contender, Ian McCall has picked up an arrest of his own for driving with a suspended license and according to reports, various drug related charges. The California resident has since been released but details are foggy as to what we can expect out of the charges.

According to the report, McCall, 28, was arrested “without incident for two Harbor Court warrants for possession of narcotic paraphernalia, possession of prescription meds without a valid prescription, and driving on a suspended license.”

The report states that undercover Laguna Beach detectives and DEA agents were working on an investigation in Irvine on Tuesday morning when they recognized McCall. A warrant check revealed that he was wanted. McCall’s bail was set for $16,500, according to the same report.