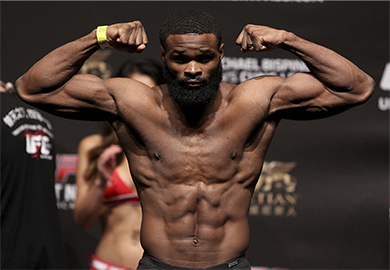 Tyron Woodley is back to his winning ways with a victory over Dong Hyum Kim tonight.

About a minute into the bout, Kim tried to catch his opponent off-guard with a flashy spinning attack. Woodley was already throwing a right hook when Kim lunged with his strike, though, and things went downhill for Kim fast.

Due to Kim’s unfortunate timing and positioning, Woodley’s right hook crashed into the back of Kim’s head and Kim dropped down to the canvas. Woodley smelled blood and jumped on him, going in for the kill. The referee gave Kim plenty of time to fight back but Woodley never gave him a chance to recover.

The referee called off the fight and Woodley was declared the victor.