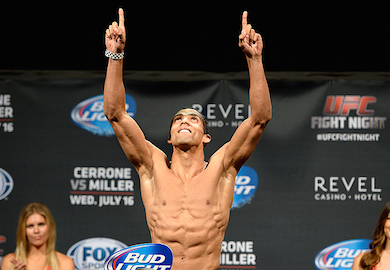 Edson Barboza now has four kick-related KO/TKO victories, the most in UFC history.

Barboza was patient in his attack and analyzed Dunham’s mannerisms well. He mentioned in the post-fight interview that he noticed Dunham’s elbow was a bit high and he viewed it as a “free kick”. That “free kick” caused the fight to end seconds later.

Barboza’s kick just barely skimmed the body of Dunham, but Dunham still crumbled to the mat as if it landed flush. That is not a dig at the toughness of Dunham, but a testament of just how deadly of a striker Barboza really is.

With Dunham doubled over in pain, Barboza went in for the kill and the referee called it off before Dunham could take anymore punishment. After watching the replay, the crowd in attendance booed at the stoppage but it was evident Dunham was in serious pain and fighter safety is a priority.

Edson Barboza def. Evan Dunham by way of TKO (Kick and Punches) 3:06 of Round 1