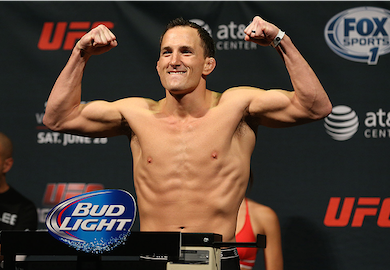 Joe Ellenberger and James Moontasri made their Ultimate Fighting Championship debuts tonight at “UFC Fight Night 44”. Their bout kicked off the main card portion of the event on Fox Sports 1 and they put on an exciting performance.

Throughout the entire first round, it seemed as if Moontasri was always one step ahead of Ellenberger. Every time Moontasri slipped one of his opponent’s punches, Ellenberger would get caught with a hard shot that shifted the momentum in the round.

Both individuals saw their fair share of offense in the second round. Ellenberger blasted Moontasri with punches while on the ground which almost set up a D’Arce and Rear Naked Choke. Ellenberger could not get the job done, however, and allowed Moontasri to get some offense in halfway in the round. Moontastri did a fantastic job at sapping the energy from Ellenberger’s gas tank and this showed when Ellenberger was extremely slow to get to his feet at the end of the round.

Moontasri could not take advantage of Ellenberger’s fatigue though as he allowed Ellenberger to press him against the fence for a majority of the third round. It was clear both men were tired and were not going to finish the fight so positioning was going to play a major role in the eyes of the judges. An errant takedown from Ellenberger led to Moontasri being on top for the last minute where the round ended.