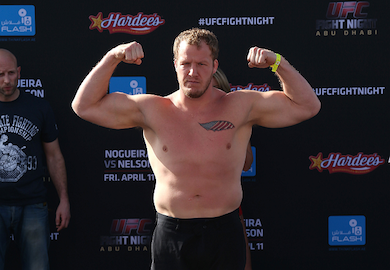 Daniel Omielanczuk and Jared Rosholt headlined the preliminary bouts that aired on UFC Fight Pass. Both competitors have a single UFC win under their belts and were looking to build a winning streak tonight.

Jared Rosholt utilized his wrestling skills on Daniel Omielanczuk tonight and was in complete control for the majority of their fight. Rosholt did a great job at spreading his weight which forced Omielanczuk to try twice as hard to just get back to his feet. Rosholt also threw some brutal elbows and knees to the body which drained his opponent’s gas tank.

It almost looked as if Omielanczuk was starting to make a comeback in the middle of the second round when he stunned Rosholt with a punch, but he pulled guard for no apparent reason. Rosholt simply recovered while tiring Omielanczuk out.

Jared Rosholt locked up the win early on in round three by landing a takedown in the opening seconds. Omielanczuk spent the remainder of the round struggling to get back to his feet, never succeeding.