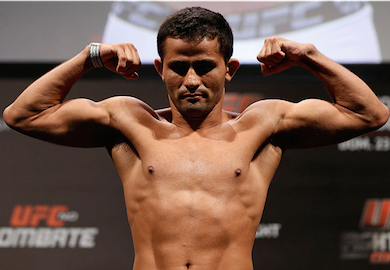 Jussier Formiga made a triumphant return to Brazil tonight by picking up an upset victory over Scott Jorgensen.

The fight seemed to have been even in the opening minutes with both men trying to find their distance but the momentum changed in the favor of Formiga in a questionable manner. As Jorgensen was ducking down for a punch, Formiga lunged forward for a shot of his own, accidentally head-butting Jorgensen in the process. Jorgensen tumbled backwards and Formiga landed on top of him.

Formiga ultimately took the back of Jorgensen and locked in a body triangle. It was not long before he trapped Jorgensen in a rear naked choke for the victory.

This was the fourth upset of the night as all four underdogs have won.