‘UFC Berlin’ Results: Mousasi Submits Munoz in Round 1 with a Rear Naked Choke 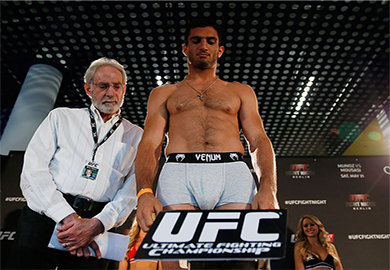 Mark Munoz tried his hardest to take this fight to the ground and when he finally did, it was not in the way he intended to.

Every time Munoz shot for a takedown, Gegard Mousasi would defend brilliantly. Most spectators would expect a striker to simply sprawl, get back to his feet and run. Mousasi is an experienced grappler though, and he defended the takedowns then tried to get top-control game in on Munoz. More often than not that strategy worked and it ultimately paid off.

Munoz was working for the takedown and Mousasi caused a scramble which let him gaining full mount. Munoz, desperate to escape, gave up his back and Mousasi dove for a rear naked choke! Munoz knew it was locked in and tried to make it back to his feet but he went right back down to his knees on the mat and proceeded to submit.

This was #7 Mark Munoz’s second loss in a row and he will likely drop three spots in the rankings this week. Gegard Mousasi was ranked #11 walking into the octagon tonight and after his victory he called out the winner of Luke Rockhold vs. Tim Kennedy.

Gegard Mousasi def. Mark Munoz by way of Submission (RNC) 3:57 of Round 1