‘UFC Berlin’ Results: Backstrom Forces Niinimaki to Tap in Round 1 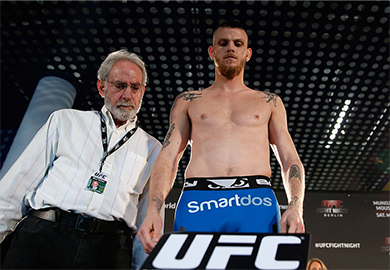 Tom Niinimaki and Niklas Backstrom kicked off the main card portion of ‘UFC Berlin’ today which aired exclusively on UFC Fight Pass. Backstrom made a successful debut tonight and finished the fight in exciting fashion with an unorthodox spin on a classic submission.

After he cracked his knee into the face of Tom Niinimaki, Backstrom was forced to defend a single leg takedown. He positioned himself from the back so he could wrap his arms around the neck of Niinimaki and work for a rear naked choke. He transitioned to a schoolyard-headlock and Niinimaki rolled through so both of their backs were on the ground. Backstrom stuck with the submission attempt, though, and continued to crank the hold. Niinimaki was in the worst positioning possible: the submission attempt was now a combination of a crank and a choke! He had no other choice but to submit.

Niklas Backstrom def. Tom Niinimaki by way of Submission (RNC) 4:15 of Round 1