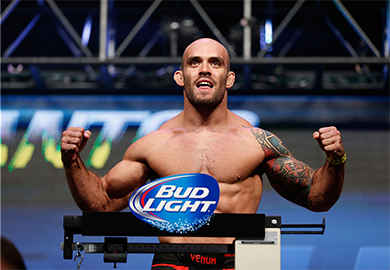 Bruno Santos frustrated fans and Chris Camozzi with his performance inside the octagon, but the fact remains that he did just enough to pick up a victory by way of judges’ decision.

Chris Camozzi looked to be on his way to a victory with his strategy in the first round. He forced the bulky Santos to work to get within striking distance and made him pay with peppering shots. Santos looked to be tiring quickly due to his muscle mass draining his energy tank, but he ended up using his size to his advantage in rounds two and three.

Camozzi got taken down in the second round and Santos utilized his brute strength to keep him there. Camozzi worked hard to get back to his feet and by the time he finally stood back up, his hands were by his side and his mouth was wide open.

From that point on, Camozzi was trying to fight off takedown attempts which he was usually unsuccessful at. At one point in the final round, he was so desperate to fight the takedown that he grabbed the top and the middle of the fence.

Even though Santos was not doing much while on the ground, the referee opted not to stand them up due to inactivity. It was up to Camozzi to get back to his feet and he was simply too tired to do so.