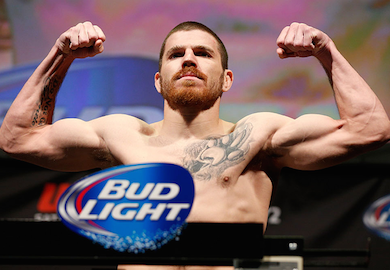 Jim Miller has established himself as one of the greatest lightweights in UFC history after his victory tonight.

Yancy Medeiros was doing a great job at utilizing his jab from a distance, hopping in and landing it but he could never follow up with something more significant. Miller cracked Medeiros in the body with a hook and pressed him up against the fence.

It was not long before Miller threw Medeiros on the ground and applied a guillotine. Medeiros showed great heart and tried to fight out of it, but he was unable to escape and eventually passed out. Miller informed the referee he was unconscious and the referee called off the fight.

Jim Miller tied Chris Lytle in most submission attempts in UFC history (31) with the guillotine he applied, and then tied Gleison Tibau with wins at lightweight (13) after Medeiros passed out.

Jim Miller def. Rancy Medeiros by way of Submission (Guillotine) 3:18 of Round 1