UFC 172 Results: Beal KOs Williams with a Flying Knee in Round 2 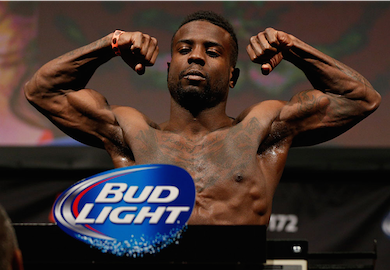 We are only one fight into the card and we may have already seen the best knockout of the night. Chris Beal was fighting to extend his undefeated winning streak while Patrick Williams was looking to secure his first octagon win. The result was a scrappy fight that brought the fans to life, capped off with a beautiful knockout.

Beal was timing Williams’ takedown attempts throughout the fight and wanted to land a flying knee at the right moment. He timed it perfectly in the middle of the second round and crashed his right knee into the skull of Patrick Williams, sending him crashing to the mat.

Beal walked away, confident that he had won the fight and he was right; the referee waved it off as soon as Williams was looking up at the lights.

Chris Beal def. Patrick Williams by way of KO (Flying Knee) 1:52 of Round 2

This article appeared first on BJPENN.COM
Previous article‘UFC 172: Jones vs. Teixeira’ Live Results
Next articleLiddell Down To Fight: ‘Convince Dana or come by the house Jon Jones’
© Newspaper WordPress Theme by TagDiv