UFC 170 Results: Koch Defeats Oliveira by way of TKO in Round 1 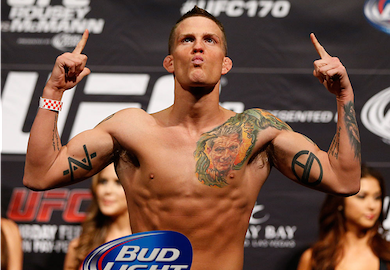 Erik Koch and Rafaello Oliveira were both looking to bounce back from tough losses with a win inside the octagon on the UFC 170 Fight Pass Prelims.

Erik Koch did a fantastic job defending Oliveira’s kicks and found his distance quickly. Koch dropped Oliveira with a left hand after he set it up with a right and went on the attack after he smelled the blood.

It seemed as if Koch had crosshairs in his eyes while he was throwing the ground and pound punches because he landed nearly all of his shots. The referee gave Oliveira plenty of time to try and recover but he simply ate one shot too many.

This was Erik Koch’s UFC lightweight debut and it looks like he will have a future in this division.

Erik Koch def. Rafaello Oliveira by way of TKO (Punches) 1:24 of Round 1